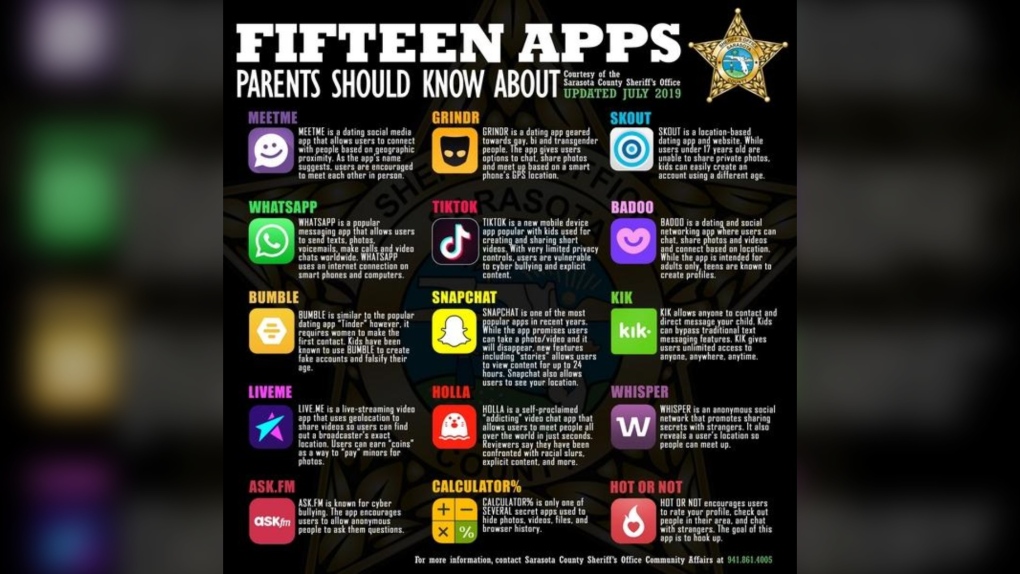 With kids and teenagers only a day away from heading back to school, many with phones and devices charged and ready, the Abbotsford Police Department is warning parents about some mobile apps that could be problematic for teens and younger kids.

A campaign was recently started by the Sarasota County Sheriff’s Office in Sarasota, Fla., after 25 people were arrested for attempting to have sex with someone the accused believed was a 14-year-old.

The Floridian sheriff’s office says all of those arrested used at least one of 15 apps found on the list, most of which are for users 17 and above or are rated M for mature. Investigators say kids can circumvent some of the age restrictions by creating accounts with fake birthdates.

1) MEETME: A dating social media app allowing users to connect based on physical proximity. App users are encouraged to meet in person. Rated Mature or 17+.

2) WHATSAPP: A widely-used messaging app that allows users to send messages, all types of media, make calls and video chats. Rated E for Everyone.

3) BUMBLE: A dating app that requires women to make the first contact. Rated Mature or 17+.

4) LIVE.ME: A live-streaming video app that uses geolocation to share videos so users can find out a broadcaster's exact location. Advertises connections with celebrity users and influencers. Police say users can earn "cins" as a way to "pay" minors for photos. Rated T for Teen.

5) ASK.FM: Officers note this app is known for cyberbullying. It allows users to ask questions to a social media network for responses. Rated T for Teen.

6) GRINDR: A dating app aimed towards the LGBT community. The app gives users options to chat, share photos, and meet based on a phone's GPS. Rated Mature or 17+.

7) TIKTOK: A new mobile device app popular with kids. It's used for creating and sharing short videos. Police say users are vulnerable to cyber bullying and explicit content due to a lack of privacy controls. Rated T for Teen.

8) SNAPCHAT: An extremely popular app allowing users to take a photo/video that eventually disappears, or upload longer-lasting stories, which saves content for up to 24 hours. Snapchat also allows users to see your location. Rated T for Teen.

9) HOLLA: A video chat and dating app aimed at younger users. Reviewers say they have been confronted with racial slurs, explicit content and more, though the app says it has an explicit zero-tolerance policy for cyberbullying. Rated Mature or 17+.

10) CALCULATOR%: Police say this is only one of several secret apps used to hide photos, videos, files and browser history. The app says it is “not designed for children.”

11) SKOUT: A proximity-based dating app. Police advise that while users under 17 are unable to share private photos, accounts with false information can be easily created. Rated Mature or 17+.

12) BADOO: A dating and social networking app where users can chat, share photos and videos and connect based on location. Rated Mature or 17+.

13) KIK: A social messaging app that has allegedly been used to exchange child pornography in the past.  Users can bypass traditional messaging features. KIK gives users unlimited access to anyone, anywhere, anytime. Rated T for Teen.

14) WHISPER: An anonymous social network that promotes sharing secrets with strangers. Users locations can be found. Rated T for Teen.

15) HOT OR NOT: A dating app allowing strangers to rate profiles and reveal locations for meeting. Rated Mature or 17+.

Parents can learn more about the apps by checking out their descriptions on the Apple App Store and Google Play Store.

If you think your child is being cyberbullied or abused online, contact your local police department.