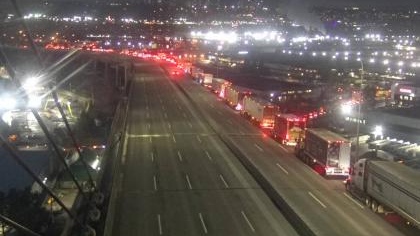 Provincial traffic cameras show a closure on the Alex Fraser bridge on Jan. 23, 2022.

The Alex Fraser Bridge was closed for eight hours Monday due to a police incident, causing congestion and delays throughout the afternoon and evening.

Around 12:30 p.m., the bridge was closed to southbound traffic, as well as one lane northbound.

Shortly after 8:30 p.m., the Delta Police Department announced on social media that the the incident had been resolved.

The incident on the Alex Fraser Bridge has been resolved. Our officers are now turning their attention to traffic flow and easing the congestion.

Thank you for your patience through the long delay.

DriveBC was urging people to avoid the area and to take the Massey Tunnel, the Port Mann Bridge or the Pattullo Bridge as alternates. However, traffic also backed up on those crossings.

Just 90 minutes prior, Delta police tweeted that officers were still on the scene and asked people to exercise caution.

“Please abide by the flagger's direction. Do not go around closures. This is dangerous for all who are working on the bridge,” reads the post.

TransLink reported that a number of bus routes between Surrey, Richmond and New Westminster were impacted, warning users to plan for extra travel time.