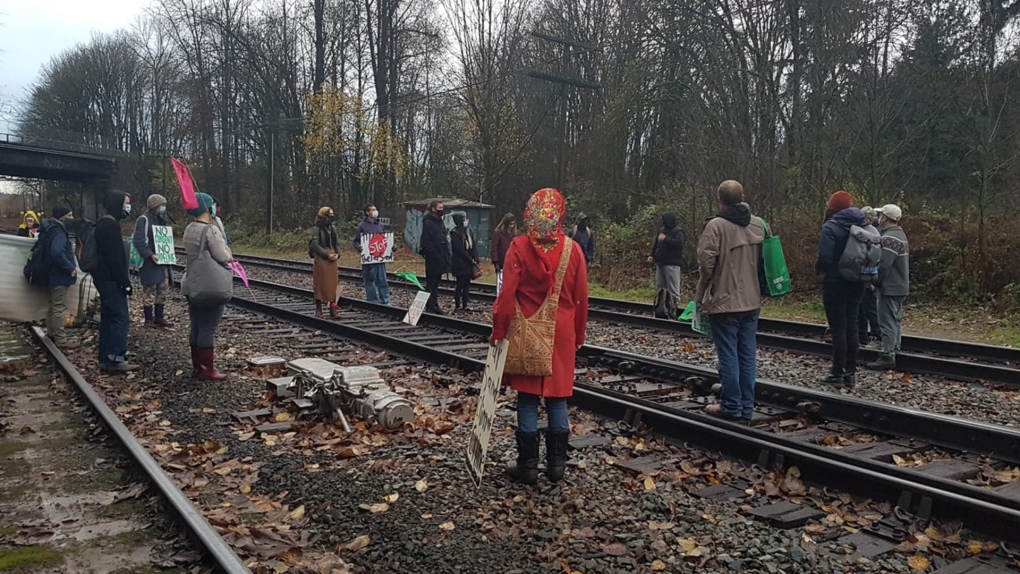 A blockade calling for the cancellation of Trans Mountain Pipeline on Nov. 17, 2020.

VANCOUVER -- Protesters have organized another blockade in B.C.'s Lower Mainland while calling on Justin Trudeau's government to cancel the Trans Mountain pipeline expansion.

The latest railway blockade was organized by the Extinction Rebellion, the same group of climate-focused activists responsible for shutting down the Burrard Street Bridge in downtown Vancouver last year and a number of other demonstrations in the region.

Ahead of the demonstration, members said they would be blocking a railway line that runs parallel to the Trans Mountain expansion route, near Highway 1 and North Road in Burnaby, in solidarity with pipeline opponents from the Wet'suwet'en and Secwepemc nations.

The group has accused the federal government of "breaking the social contract" by purchasing the project and pushing it forward.

"The government isn’t doing what it takes to protect Canadians from the climate crisis, and it continues to take land from Indigenous peoples for dangerous fossil fuel development without consent," spokesperson Zain Haw said in a news release about the demonstration.

"The Trans Mountain expansion will contribute to a crisis that threatens death by starvation of hundreds of millions around the world."

Extinction Rebellion said the demonstration would be non-violent.

It's unclear how long members intend to block the railway tracks. The group's protest on the Burrard Street Bridge in October 2019 lasted for more than 14 hours before police moved in and arrested several participants.

Blockades and protests were regularly making headlines in B.C. before the COVID-19 pandemic brought the province to a standstill. During one demonstration, members of the Extinction Rebellion the driveway of Premier John Horgan's home in Langford.

The Trudeau government purchased the Trans Mountain project for $7.6 billion in 2017, but the coast has since ballooned to $12.6 billion. The government has said its plan is to recoup the investment by eventually selling the pipeline.