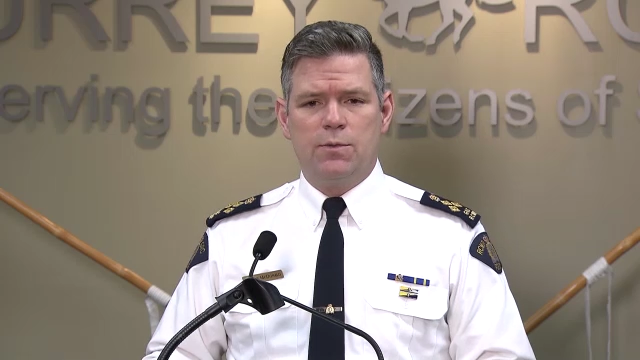 VANCOUVER – The officer-in-charge of Surrey's RCMP detachment is leaving his post amid the city's pending transition to a municipal police force.

But Asst. Commissioner Dwayne McDonald, who is taking a new job with the B.C. RCMP, told reporters that Surrey's ongoing push for a local police department wasn't behind his decision.

"I'm very mindful that some may view my departure as a harbinger of the policing transition," McDonald said at a news conference Wednesday. "I want to assure you that this is unequivocally not the case."

Switching to a municipal force was a key promise in Mayor Doug McCallum's election campaign last year – a pledge that hinged on the premise that the community would be better served by a new department than it has been by the RCMP.

McCallum has since claimed gang crime in the city is the "worst it's ever been." By contrast, the RCMP has released statistics showing violent crime has been on the decline, and that overall crime reached a 10-year low in 2018.

McDonald only mentioned McCallum on Wednesday to give him thanks.

"I would like to thank the mayor and council, as well as all the staff at city hall for the privilege of serving as your police chief," he said.

The commissioner will remain with the Surrey detachment until a replacement is hired, and insisted his departure will not impact policing operations in the city.

He also said he's confident the transition team appointed by the province to oversee the switch will be "fully informed" in its decisions.

McDonald's new title will be the RCMP's criminal operations officer in charge of federal, investigative services and organized crime for B.C. He said he'll be tackling money laundering, gang activity, cybercrime and other problems faced by communities across the province.