The number of COVID-19-positive patients in B.C. hospitals has more than doubled since the end of March, with 570 hospitalized as of Thursday. At this time last week, there were 485 patients in hospital. On March 31, there were 281.

The number of patients in critical care has also risen, from 38 as of last Thursday to 47 this week. 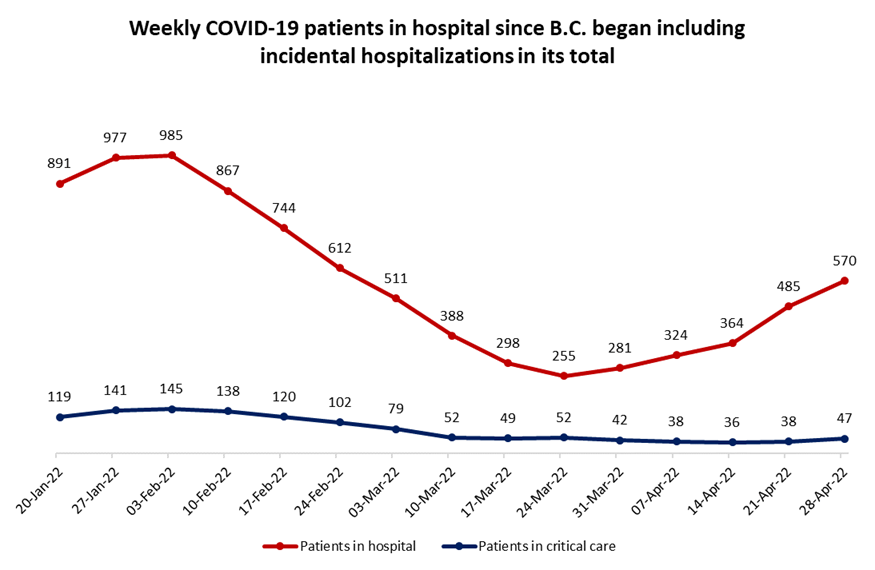 The number of COVID-19 patients in hospital on Thursday each week since the province began including all test-positive patients in its hospitalization count in January 2022 is shown in this graph by CTV News.

Hospitalization totals include both those who have serious illness caused by COVID-19 and those who are admitted to hospital for other reasons and test positive incidentally.

Since the province began this "hospital census" approach in January, the high point for patients in hospital on a Thursday has been 985, which B.C. hit in early February. Weekly hospitalization totals hit a low of 255 late last month.

Thursday's update comes as independent modellers say the delayed and limited statistics the province releases make it "hard to do anything useful" with the data.

Current hospitalizations and critical-care admissions are the only up-to-date information the province shares in its weekly update each Thursday.

Other data provided pertains to the last full epidemiological week, which ended five days earlier. And even those numbers are subject to revision in future updates.

This Thursday, for example, the B.C. Centre for Disease Control reports that there were 355 new COVID-19 hospitalizations across the province from April 17 to 23. That number is "expected to increase as data become more complete," the BCCDC says.

Last week, the BCCDC reported 238 new hospitalizations for the week of April 10 to 16. In this week's update, that number has been revised up to 300.

Deaths are a similar story. Last week's report showed 27 COVID-19-related deaths from April 10 to 16, with the caveat that the total was expected to increase.

It should be noted that reported death totals are considered an overcount. They describe "30-day all-cause mortality," which means anyone who dies within 30 days of testing positive for COVID-19 is included in the total, even if COVID-19 was not what killed them.

"All-cause mortality is being used because cause of death takes approximately eight weeks to be recorded," the BCCDC explains in its weekly reports.

"Retrospective evaluations of underlying cause of death will be done by the BCCDC, in addition to the data provided in this report, to better understand true COVID-19 mortality."

Though the weekly data comes with a lot of caveats, the trend it illustrates is clear. The number of people in hospital continues to rise and the number of new hospitalizations each week continues to start at a higher point than the previous week and get revised upward, as does the number of deaths.

Those totals include only "lab-confirmed, lab-probable and epi-linked cases," according to the BCCDC. Infections confirmed through rapid antigen testing - the only testing method available to the vast majority of British Columbians - are not tracked, meaning the true number of coronavirus cases in the province cannot be known.

Wastewater surveillance in the Lower Mainland can provide an indication of trends, however, and four of the five treatment plants in the region have shown increasing concentrations of the virus for at least five weeks, according to the BCCDC's weekly "situation report."

The fifth wastewater treatment facility in the region has seen "elevated" viral loads, but has not shown a clear trend.

All of this adds up to a sixth wave of the pandemic in B.C. that is still growing. Increases in transmission were expected with the end of nearly all public health orders in recent months, and B.C. health officials have said a return of mask mandates or other rules would be "a last resort."

One of the reasons officials have given for their reluctance to use public health orders to limit the spread of COVID-19 is the antibodies B.C. residents have developed through vaccination and previous infection.

While this resistance to the coronavirus has not prevented people from becoming infected or reinfected, it has reduced the severity of illness for those who do.

The province administered 33,954 vaccine doses during the week of April 17 to 23, the majority of them boosters.

The province has been offering fourth doses - second booster shots - to people considered clinically extremely vulnerable to COVID-19, long-term care residents and those ages 70 and older.

Looking at outcomes by vaccination status for those ages 70 and older on the BCCDC's COVID-19 Surveillance Dashboard, it's clear that both unvaccinated seniors and those who have received a booster shot are still vulnerable to COVID-19.

The risk of hospitalization or death is greater for those in the age group who are unvaccinated, however.

Because the boosted group far outnumbers the unvaccinated group, it also accounts for more deaths and hospitalizations, overall.

Looking at the rate of death and hospitalization per 100,000, however, it becomes clear that the unvaccinated are more at risk.