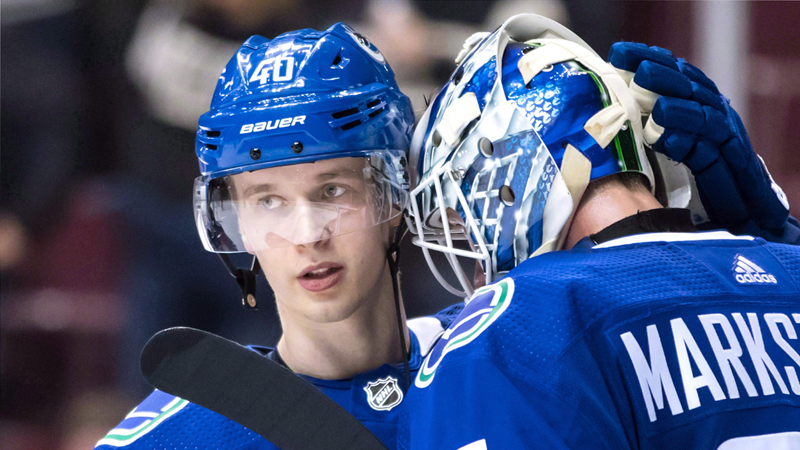 “I always believe in myself. But to be honest, growing up I didn't think I would play in the NHL,” the Vancouver Canucks' star rookie said Tuesday. “I was just practising hard, always working and took it step by step. And now I'm here, living my dream. Nothing's come easy.”

Pettersson will live out a whole new dream this weekend when he takes part in the NHL's all-star weekend. The 20-year-old native of Sundsvall, Sweden, has earned his spot in the event with eye-popping performances over his first four months in the league.

He leads the Canucks in scoring with 23 goals and 21 assists, despite having missed 11 games with injuries.

Ottawa Senators centre Colin White is the current runner up in the rookie scoring race with 26 points.

“Obviously, he's improved,” Green said. “The rate of improvement for young players, it's not the same for every player. I think elite players tend to make adjustments and improve a lot quicker. And I think he's done that.”

“I'll still continue working. Even though I've had some success lately, it's a lot of work behind it,” he said.

The six-foot-two, 176-pound Pettersson has also been motivated by the criticism that he's too small to hold up in the NHL.

“I've been doubted that I can't play because I'm not a big person, I'm too skinny,” said Pettersson, who has focused on what he's good at, particularly his hockey mind, and hone strengths that other players may not possess.

Now he's about to share the ice with some of the greatest hockey minds in the league.

Pettersson said he didn't grow up watching the star-studded game on television but would often catch the highlights on YouTube.

“For the most part I think it will be fun to be able to see all the good players up close and maybe get to know some of them,” he said.

Brock Boeser was a rookie last year when he represented the Canucks at the event and said it was “humbling” to be around some modern hockey legends.

Boeser said he thought about what the experience would be like for much of his six-hour flight to Tampa Bay and was incredibly nervous before his turn in the shooting accuracy event.

Despite the nerves, Boeser hit all five targets in 11.13 seconds to win the competition over Crosby, Blake Wheeler, Steven Stamkos and four other all-stars.

Afterwards, Crosby skated over to introduce himself and chat while technicians fixed the targets. Boeser's shot had broken the plastic.

“Once you get out there and do it and you get out there in the game, you're not nervous anymore and you can enjoy the whole thing,” said Boeser, who went on to tally 55 points in his first full season before he was sidelined with a broken bone in his lower back.

Pettersson doesn't know yet which skills competition he'll be in this weekend, but had some comments about Boeser's performance last year.

“He was lucky,” Pettersson said with a smile.

The young Canuck should line up against the other all-stars in this year's accuracy event, Boeser said.

“Are you kidding me?” he said. “You see how good his accuracy is out there. It wouldn't surprise me. But I mean, he's so skilled at everything else so who knows what they're going to put him in.”