NFL ICYMI: Not only is Lamar Jackson a QB, he might be MVP 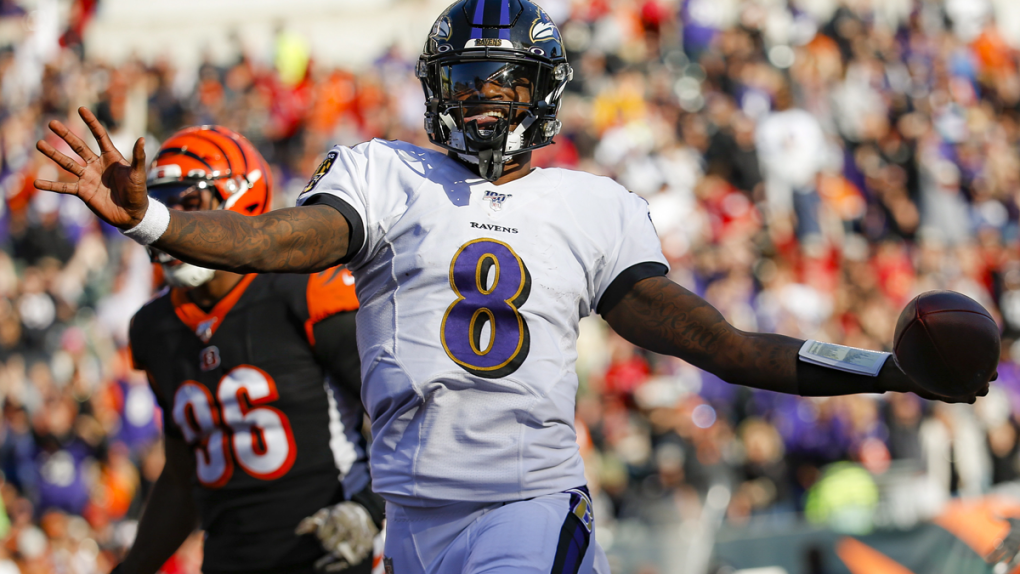 Lamar Jackson now owns a signature moment - a spin-and-make-'em-miss 47-yard TD run that was something straight out of a video game.

And Jackson also now owns his signature stat - a perfect passer rating in two games during the same season, something only one other player in league history has accomplished.

This guy wasn't supposed to be a QB? Ludicrous, of course. He might very well be this season's NFL MVP.

The 22-year-old Jackson keeps showing off what he can do in his second season with the Baltimore Ravens, with plays designed and called by offensive co-ordinator Greg Roman, who did fine work a while back with a guy by the name of Colin Kaepernick. The latest showstopping performance for Jackson came Sunday, when he led Baltimore to a 49-13 victory over the Cincinnati Bengals.

"It's ridiculous. It is. For sure," Ravens offensive lineman Marshal Yanda said. "I mean, he's obviously changing the game for us, in every way."

He also gained 65 yards on the ground before earning an early seat on the sideline in a blowout against the league's lone winless team, a week after leading the Ravens past the previously unbeaten New England Patriots.

Jackson joined some fairly good company: The only other players in the Super Bowl era with at least three passing TDs, one running TD and a perfect rating with at least 15 completions were Joe Montana and Aaron Rodgers.

The score on which Jackson froze, ran through or sped by several Bengals defenders will be on highlight reels for quite some time.

"I said to the offensive coaches ... 'They'll be watching that run for decades and decades. That's one that everybody in the country's going to see by tomorrow afternoon,"' Ravens coach John Harbaugh said. "That was something. That's rare. That was special."

Adding to the fun: Roman set up Jackson in a formation with reserve QB Robert Griffin III and running back Mark Ingram in the backfield, giving the Ravens a trio of Heisman Trophy winners together. Jackson ran an option, pitching the ball to RG3 for a 12-yard run.

The Ravens took to the campaign trail after the game - touting him as "THE MVP!!" - and it's hard to see Jackson not being a real factor in the final vote. Sure, Seattle Seahawks quarterback Russell Wilson and Carolina Panthers running back Christian McCaffrey have strong cases, too, but if Jackson keeps doing what he does and Baltimore keeps adding to its 7-2 record, the support is likely to grow.

Here are other top topics after the 10th Sunday of the NFL regular season:

The two most popular teams in NFL win-or-die pools were the New Orleans Saints and the Indianapolis Colts. Why's that? Well, both were facing opponents that came into the day with 1-7 records. But guess what? The Saints lost to the Atlanta Falcons 26-9, while the Colts - who gave quarterback Brian Hoyer his first start in more than two years because Jacoby Brissett was injured - were beaten by the Miami Dolphins 16-12. Hoyer's teams have lost the past 10 games he's started; the everyone-thought-they-were-tanking Dolphins have won their past two games. A third 1-7 club came through, too: The New York Jets got their second victory, although this was far less surprising, because they beat the just-as-bad Giants 34-27.

Hoyer made the Colts the 16th team - out of 32 in the league - to start multiple QBs this season. The Bengals also turned to a second quarterback starter, Ryan Finley, in place of the benched Andy Dalton, while the Detroit Lions used Jeff Driskel because Matthew Stafford was injured, ending his 136-start streak that dated to the 2010 season. No surprise, really, that the Colts, Bengals and Lions all lost Sunday.

The new rule allowing for pass interference to be reviewed has led to just as much confusion as the "What's a catch?" debates did. The latest example came at the end of Tampa Bay's 30-27 victory over Arizona, when Cardinals quarterback Kyler Murray's pass fell incomplete as receiver Pharoh Cooper was manhandled by Bucs cornerback Jamel Dean.