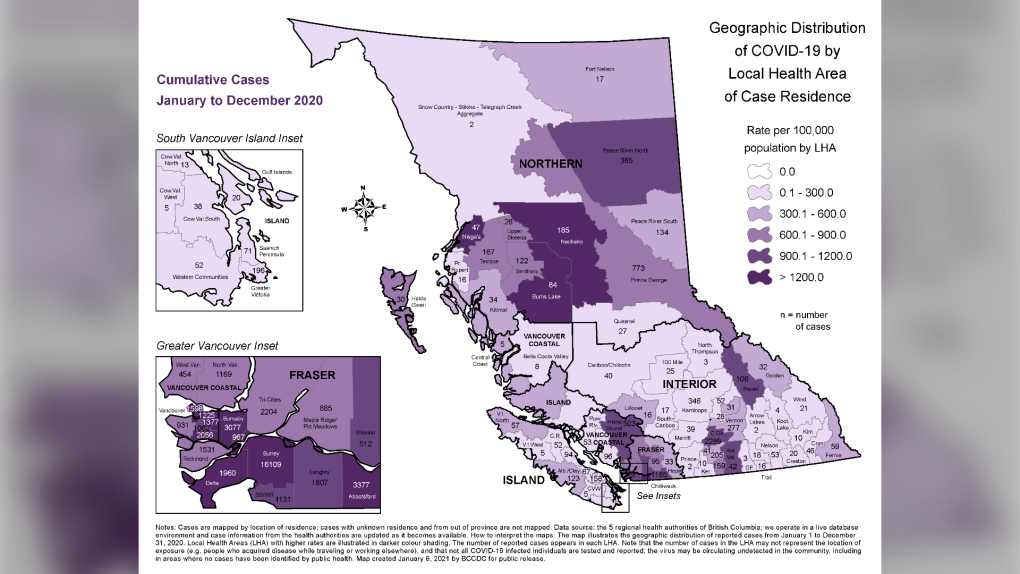 The latest BCCDC map shows cumulative cases of the coronavirus recorded in each of the province's "local health areas" between Jan. 1 and Dec. 31, 2020. (BCCDC)

VANCOUVER -- Surrey residents accounted for nearly one-third of all COVID-19 cases recorded in B.C. in 2020, but the disease touched every corner of the province, according to new geographic data released by the B.C. Centre for Disease Control.

The latest BCCDC map shows cumulative cases of the coronavirus recorded in each of the province's "local health areas" between Jan. 1 and Dec. 31, 2020.

Over the course of the calendar year, the local health area that includes most of the City of Surrey recorded 16,109 total COVID-19 infections, or roughly 31 per cent of the 51,983 cases of the disease that were confirmed in the province in 2020.

B.C.'s largest city, Vancouver, is broken down into six different local health areas, but adding them together shows a total of 8,249 cases in 2020, or almost 16 per cent of B.C.'s total for the year.

The local health areas that comprise the cities of Abbotsford and Burnaby posted the next-highest overall caseloads, with 3,377 and 3,077 infections, respectively.

While the highest overall case counts in the province are found in major cities, every region of the province saw at least a few residents test positive for COVID-19 last year, according to the BCCDC's map.

Indeed, some regions with sparse populations recorded per-capita totals for infections that rival those seen in Surrey and other Lower Mainland hotspots.

The Northern Health regions of Nechako, Burns Lake and Nisga'a each saw case totals that equate to more than 1,200 infections per 100,000 residents in 2020.

No regions in either the Interior or Island health authorities recorded that many infections per capita. The regions in Interior Health with the highest density of cases were Central Okanagan, Revelstoke, and Kettle Valley, each of which saw between 900 and 1,200 infections per 100,000 residents.

In Island Health, per-capita caseloads were significantly lower. The highest numbers of infections per 100,000 residents were seen in the Vancouver Island North and Alberni/Clayoquot local health areas, which each recorded between 300 and 600 cases per 100,000 in 2020.

On Thursday, the BCCDC also released its latest map of weekly cases by local health area, which shows data only for cases recorded between Dec. 27 and Jan. 2.