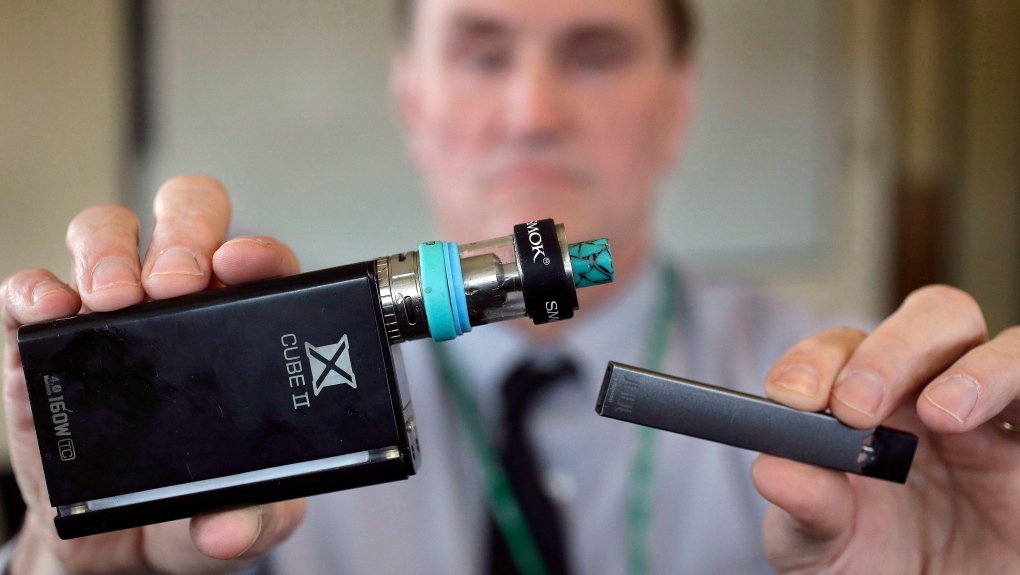 In this Tuesday, April 10, 2018 photo Marshfield High School Principal Robert Keuther displays vaping devices that were confiscated from students in such places as restrooms or hallways at the school in Marshfield, Mass. THE CANADIAN PRESS/AP/Steven Senne

VANCOUVER – With cases of probable vaping-related illnesses cropping up across the country, a new poll has found that a significant portion of Canadians support a temporary ban on the products.

According to a survey conducted by Research Co., 74 per cent of Canadians agree with their province implementing a vaping ban, similar to the one recently introduced in Massachusetts.

That ban, which was brought in on Sept. 24, includes a four-month restriction on all vaping products in the state.

"The purpose of this public health emergency is to temporarily pause all sales of vaping products so that we can work with our medical experts to identify what is making people sick and how to better regulate these products to protect the health of our residents," Gov. Charlie Baker said in a news release after announcing the temporary ban in his state.

About one in 10 Canadians said they used an electronic cigarette in the past year, with the proportion being higher amongst those aged 18 to 34 at 17 per cent.

B.C. residents were also more likely to say they'd used an e-cigarette at 16 per cent.

In the western province, the government is expected to make an announcement related to vaping and youth Thursday morning.

Municipalities are also addressing the issue as earlier this month, Vancouver's city council voted in favour of exploring ways to keep kids from vaping products, and to look into advertisement restrictions similar to those already in place for cigarettes. Richmond and Coquitlam are also considering regulations.

The Research Co. poll released Wednesday found that four-in-five Canadians want vaping products containing nicotine to carry a warning, similar to those seen on tobacco products, while 74 per cent said they want the use of e-cigarettes to be restricted to the same areas where smoking is currently allowed.

Social pressures are also mounting as 54 per cent of B.C. residents say they would not consider dating someone who uses an e-cigarette.

"When it comes to vaping and dating, there is no gender gap across Canada," said Mario Canseco, president of Research Co. in a news release. "Equal proportions of men and women say they would not consider courting a vaper."

Results were gathered from an online study conducted from Oct. 21 to 23, 2019 among 1,000 Canadian adults. The margin of error — which measures sample variability — is plus or minus 3.1 percentage points, 19 times out of 20.

With files from CTV News Vancouver's Kendra Mangione and AFP