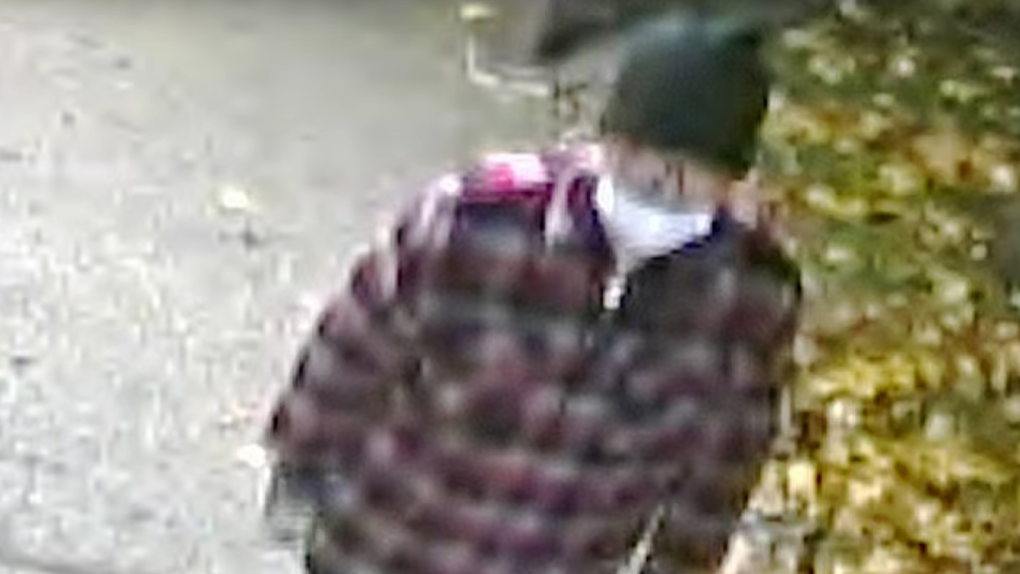 A suspect in the Burnaby Hospital fire is pictured in a still image from surveillance camera video released by the Burnaby RCMP.
BURNABY, B.C. -

Exactly one year since a late-night fire forced an evacuation at Burnaby Hospital, the Burnaby RCMP are releasing two surveillance videos of the suspected arsonist.

“Today marks one year since a significant fire was intentionally set at the hospital, causing millions of dollars of damage and putting added unneeded strain on our healthcare system,” said Cpl. Mike Kalanj.

The fire broke out in the Cascade building of the hospital where the mental health services wing is located.

Back on Dec. 17, 2020, Mounties released a still image from one of the surveillance footage, calling the man a person of interest.

Now they’ve identified the man as the primary suspect.

In the first video released, the suspect is seen wearing a black toque, plaid shirt, dark pants and beige shoes. The man is also wearing a disposable surgical mask.

He approaches the camera and walks out of frame, then four seconds later, he walks back to where he came from.

In the second video, the suspect is seen inside the elevator of the hospital.

It’s not believed he was a patient at the time, according to police.

Police said the videos were taken on the night of the arson, before the fire started.

The lead investigator in the arson, Cpl. Andrew Coupe, said the detachment has embarked on an “extensive and exhaustive” investigation, including a seven-day examination of the fire scene, interviewing witnesses, conducting forensic analysis, going door-to-door in the neighbourhood and reviewing over 1,500 hours of surveillance footage of the hospital and area.

He said now, they are taking the next step by appealing to the public for information.

“Today represents a key step in pushing this investigation forward. You're sharing video of the suspect with the media and the hopes that someone can identify this man,” he said.

The hospital is still undergoing renovations in relation to the damage caused by the fire.

A Fraser Health spokesperson said there is no updated timeline on when a demolition will happen and when the renovations will be complete.

At the time of the fire, it forced people to evacuate and the emergency department couldn't admit patients for a period of time. Some patients were diverted to other hospitals.

Burnaby Hospital was also dealing with multiple COVID-19 outbreaks at the time. That outbreak eventually led to 62 patients and 50 staff members becoming infected and a dozen people died.

Health officials said at the time, the evacuations because of the fire may have contributed to the spread of the disease.