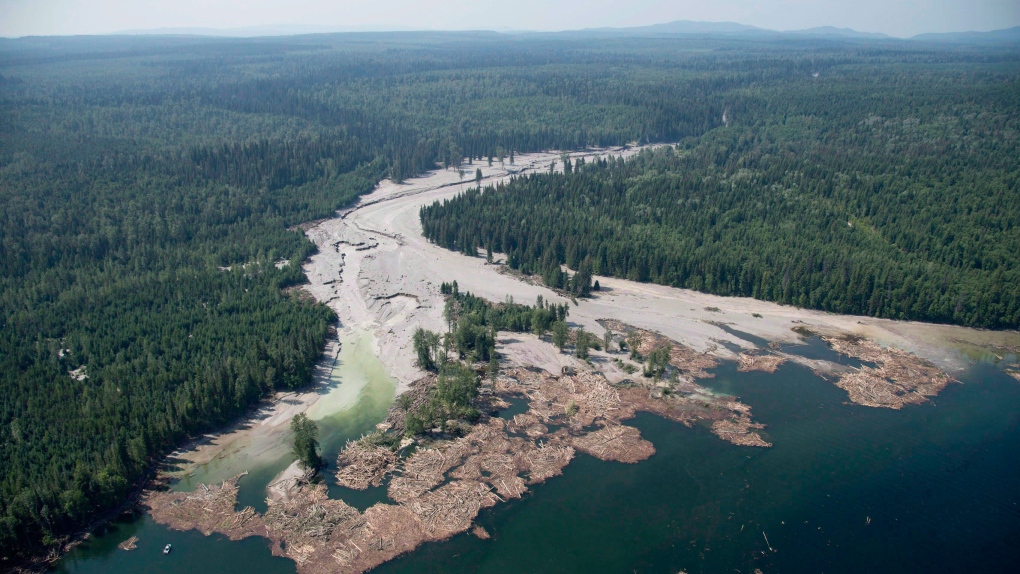 Contents from a tailings pond is pictured going down the Hazeltine Creek into Quesnel Lake near the town of Likely, B.C. on August, 5, 2014. (Jonathan Hayward / The Canadian Press)

Michelle Mungall said Monday the government will spend $20 million over the next three years to hire 65 safety and enforcement officials and improve the mine permit approval process in an effort encourage investment.

She said the changes were based on the results in the Mining Jobs Task Force report which made 25 recommendations to improve mine safety for workers and the environment, while spurring investment.

"The Mining Jobs Task Force came in and said that is very important and this is how we need to be doing it," she said. "That's exactly what this announcement is about. We're making sure situations like Mount Polley are more preventable going into the future because we're going to have more boots on the ground."

B.C. auditor general Carol Bellringer recommended in a separate report after the dam's collapse that the Mines Ministry separate its enforcement and compliance division and make it independent from the permitting office, Mungall said.

In August 2014, Mount Polley's massive tailings dam breached at the copper and gold mine in B.C.'s Cariboo region near Quesnel Lake, sending 24 million cubic metres of waste and mine water into nearby waterways.

Mungall made the announcement at a B.C. Mining Day news conference outside the legislature accompanied by members of the mining industry.

No charges have been laid in connection to the disaster. The statute of limitations on possible federal Fisheries Act charges will expire in August.

Imperial Metals Corp. said last month it is suspending operations at Mount Polley due to declining copper prices. A company statement said the suspension plan includes milling of low grade stockpiles which is expected to extend operations to the end of May.

A report into the disaster said the tailings dam was build on a sloped glacial lake, weakening the foundation of the dam. It said the inadequate design of the dam didn't account for drainage or erosion failures associated with glacial till beneath the pond.