VANCOUVER -- An unpleasant outbreak is underway in the Lower Mainland, with an unusually large quantity of two different moth species flocking to light sources and making their way inside homes and businesses.

The outbreak of western hemlock looper moths is now in its second year, but a UBC expert says the population has surged and he’s never seen it this bad before.

“It’s what we call cyclic, so every 10 to 20 years, you get an outbreak. The populations grow and they kind of get out of hand and all the conditions are right — warm summers, warm winters, droughts stress the trees — and then they start breeding and have a huge party,” said forest pathologist Richard Hamelin.

The western hemlock looper is an insect native to B.C. and typically found in forests, which is where the outbreak started on the North Shore. But with so many parks and trees in residential areas, they’ve found ample food in other parts Metro Vancouver — inundating commercial buildings and residential areas alike.

An entomologist with the Ministry of Forests says that last year’s outbreak was only for the brown hemlock looper, whereas this year a white moth called the phantom looper has also exploded in number and is classified as an outbreak.​

“I think the severity is a bit higher, the actual extent at this point we haven’t fully quantified but it doesn’t seem that out of the ordinary compared to the last outbreak,” said Babita Bains. “A lot of them can be carried by winds, they are strong flyers, they are moving around.”

On social media, pictures and videos show swarms of the tiny insects under artificial lights at night, while they perch on doors, windows and the sides of buildings during the day. The North Shore is particularly hard-hit, and CTV News has documented several homes liberally dotted with the creatures, which are roughly the length of a dime. Bains says the evidence is anecdotal at this point, but it seems there are slightly more phantoms in New Westminster, Burnaby and Vancouver while the North Shore cities have a relatively even mix of phantom and hemlock loopers.

Looper moths do not eat clothing, pantry items or paper — and they don't bite! — but the caterpillars the moths start as seek out the needles on conifers and prefer hemlocks in particular.

“If it ends up in your apartment it’s in the wrong place, it’s actually looking for a tree trunk. The females lay their eggs on the tree trunk and that’s what they’re looking for,” said Hamelin, who says there’s not much to be done about the pests whose primary predator is the wasp. “They’re not going to survive. They’re just going to die. These adults, all they do is fly around, mate and then females go lay their eggs and then they die — probably within a couple of weeks.” 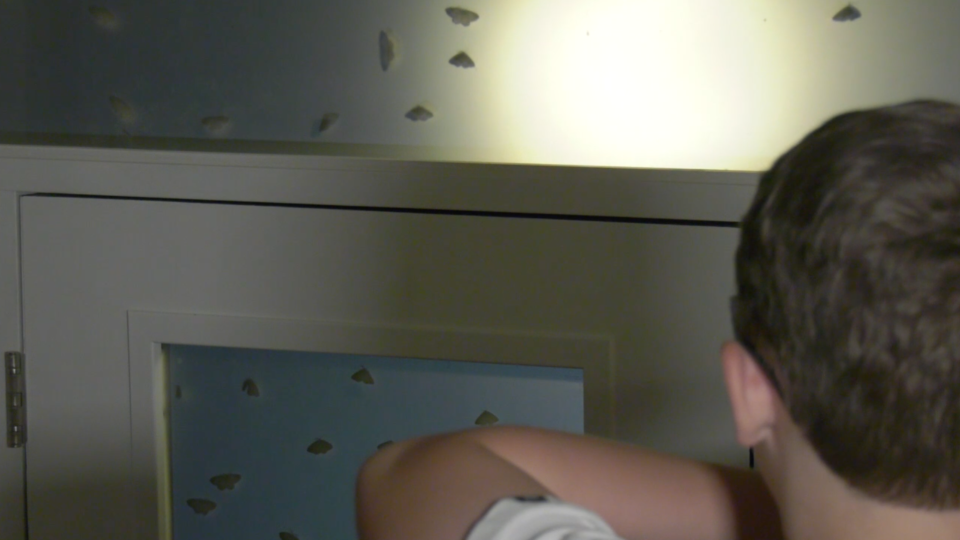 Hamelin says after a two-year population surge, the moths normally peak in number and then collapse the following year so it’s unlikely that we’ll have to deal with them again. However, we could be seeing the impact of this year’s infestation next year in our forests and parks, where hemlocks in particular have been hard-hit by the moths — with a number of trees stripped of their needles entirely.

“Moths are a small annoyance, but the bigger problem to me is some of those trees in parks are going to be defoliated and some of them will die or be weak enough that something else will knock them down,” said Hamelin. “I’m going to guess there will be a lot of dead trees.”

Bains says that with the warm weather and lack of rainfall this week, the moths are having an easy time mating and laying eggs so she expects just as many next year and possibly the year after before the population collapses again.

“I think we’re coming into the peak of the flight just based on what we’re seeing. I think it started about a week ago and we’ll probably seen them flying around for a couple weeks,” she said.

While the province uses biological insecticides to manage defoliator insects in the Interior, they don’t often manage insect populations on the west coast because it’s not efficient and there are many overlapping jurisdictions with control over treed areas — not to mention private property in urban areas.