Mom furious over 'cartoon pornography' flipbook given to Grade 8 son

A Vancouver Island school district is apologizing after a graphic flipbook depicting sexual intercourse was taken home by a Grade 8 student.

Cathy and Clay Sanders were outraged when their 13-year-old son showed them the booklet, called “Put on Something Sexy,” when he got home from school.

“I was physically nauseous when I saw what they had given to him,” mother Cathy Sanders told CTV News.

The flipbook reveals a woman putting a condom onto a man, then having sex with him, as the pages are flipped.

The book was given to the Nanaimo boy as a prize in a sexual-health class on Jan. 31., during a presentation by the group AIDS Vancouver Island.

“I don’t think any depictions of sexual activity are necessary to pass on to children in school,” he said.

The parents immediately contacted school administrators, who said they were also concerned with the material.

Donna Reimer with the Nanaimo-Ladysmith school district said AIDS Vancouver Island had made the booklet available for students to take home, but the school district didn’t approve the content beforehand.

“When the school discovered the material they realized it was inappropriate and they removed it,” said Reimer.

The school district issued an apology letter to parents at Wellington Secondary School, saying it will now review any material to be given out to students by outside presenters.

AIDS Vancouver Island has been educating students for the past 15 years. It says the book has been used in many classrooms without a problem and is defending its use of the flipbook for educational purposes.

“Providing students with straightforward, non-judgmental information about safer sex and sexuality is critical to making sure that those students know how to protect themselves against not only HIV but also a host of other sexually transmitted infections,” said spokesperson Eric Berndt.

But that answer isn’t satisfactory for Cathy Sanders, who suggested her son was traumatized by the sexy pamphlet.

“Once a child is exposed to something you can never erase that from their memory,” she said.

Have your say: Is this flipbook educational or outrageous? 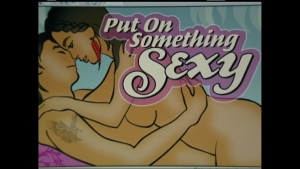