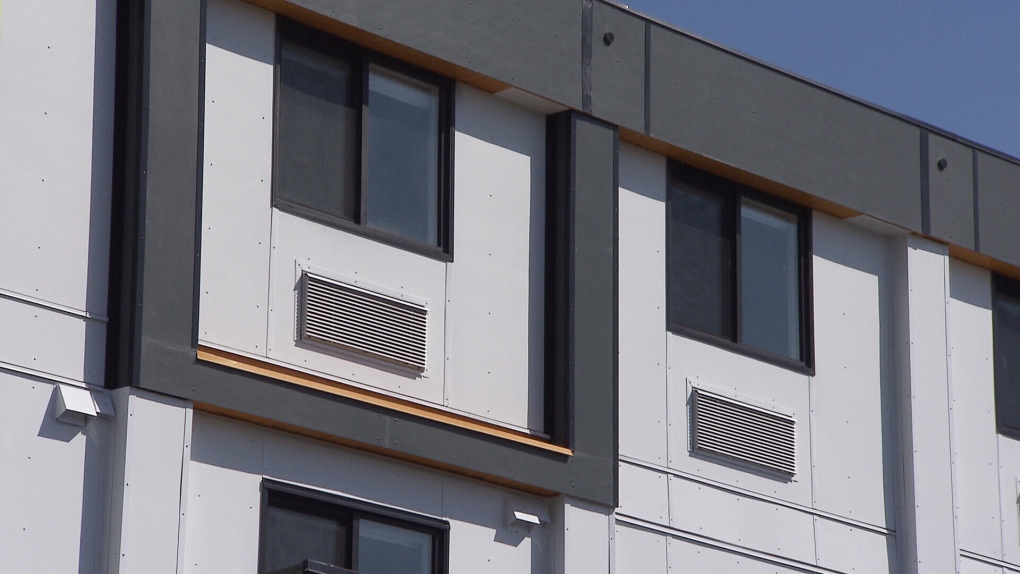 Modular housing is seen at the site of the Sugar Mountain homeless camp on Friday, April 27, 2018. (CTV)

VANCOUVER - What was a tent city for the homeless just a few months ago in east Vancouver is now a modular housing project where some of those campers and others will be housed.

The project is one of four the B.C. government and city of Vancouver have recently collaborated on in an effort to help get a growing homeless population off the streets.

Poverty Reduction Minister Shane Simpson said Friday the key to success of the projects is the round-the-clock support services available to tenants, including access to mental health and addiction specialists, as well as skills training and meal programs.

The so-called Sugar Mountain tent city was shut down by the city over health and safety concerns last December. It took just nine weeks to put together Chartrand Place, the 39-unit modular building on the site.

Officials will soon open a second such complex a 10-minute walk from the Sugar Mountain site that will be for women only.

The buildings are part of the provincial government's affordable housing strategy which aims to create 600 modular homes in Vancouver and 1,400 more across B.C. over the next three years to house people living in extreme poverty.

Vancouver's Mayor Gregor Robertson said housing more homeless is reason to celebrate but the journey is far from complete.

“We have been in an unbelievably difficult struggle here in Vancouver for the past decade just trying to build enough housing to keep up with the growth of homelessness,” Robertson said outside the 39 new rental units. “Thousands of people have been housed off the streets of Vancouver over the last decade but it hasn't been enough.”

The units will be rented out at shelter rates, $375 per month, and come with a kitchen, bathroom, and housing supplies like bed sheets and dishes.

Dean Wilson, who stood on the sidelines of the news conference, said that the assistance given to him by the non-profit Portland Hotel Society helped him turn his life around. He now lives in community housing after being homeless and addicted in the city.

“They thought about me,” he said of the social service group.“ My life has completely changed.”

“You know I'm back with my kids and my grandkids, my drug use has stabilized through an opioid-substitution program and life couldn't be better for me.

It's simple: house people and you're going to solve a lot of problems.“

Chartrand Place and Aneki Housing for Women, the women-only facility operated by Atira Women's Resource Society, are both part of the city's pledge to create 1,000 new social housing units by the end of 2018.