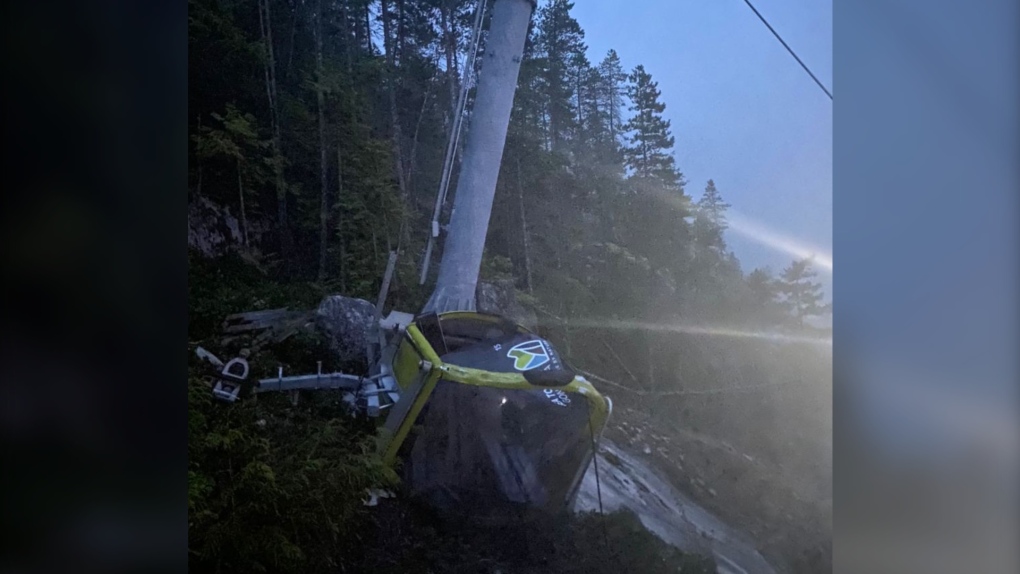 A Sea to Sky Gondola car lies on the ground. The attraction says the main cable was deliberately cut for a second time on Sept. 14, 2020. (RCMP handout)

VANCOUVER -- A technical report investigating what caused the Sea to Sky Gondola's cable cars to come crashing down for a second time confirms multiple cable strands were cut, and the incident wasn't due to design or operation failure.

Technical Safety BC released its findings Friday about the Sept. 14 incident, when the attraction's security team alerted police to yet another act of vandalism. It was the second time in just over a year that the gondola's main haul rope was deliberately cut.

"The Sea to Sky gondola haul rope, which supports the gondola cars and moves them along the length of the system, is made of galvanized steel and composed of six individual strands," the report says.

"During the incident, several of the haul rope's strands and wires were severed, and the remaining failed due to tension overload."

Just over a year ago, lines at the Sea to Sky Gondola were deliberately cut for the first time, sending the attraction's cable cars crashing to the ground. About 75 staff members were laid off as a result of the attraction being forced to close.

The gondola reopened in February after more than $5 million in repairs, then temporarily closed due to COVID-19 in March. The attraction reopened with new health and safety measures in May.

A few weeks before the September incident, campers in the area heard the alarm activated in the middle of the night. Mounties confirmed they responded to an alarm and said they found two people climbing one of the towers. They weren't believed to be at risk of cutting the cables, however, and police said they didn't have any large tools with them.

Technical Safety BC said it is working with the RCMP as it continues to investigate both incidents.

"Our team has worked with other regulators and stakeholders internationally to better understand these types of events," said Jeff Coleman, director of risk and safety knowledge with Technical Safety BC, in a news release.

"The public should rest assured that what happened at the Sea to Sky Gondola is exceptionally rare for this industry."