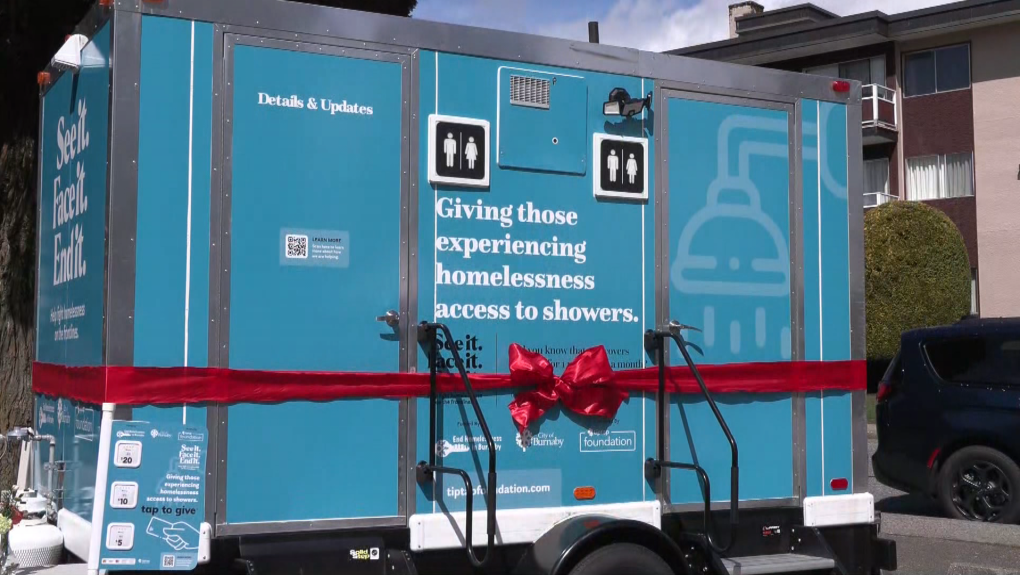 The Society to End Homelessness launched its mobile shower unit Tuesday in Burnaby.

A mobile shower unit for people who are homeless was unveiled in Burnaby Tuesday, an initiative described as the first-of-its-kind in Metro Vancouver.

To start, the Society to End Homelessness will be making showers available at their outreach resource centre at Southside Community Church every Thursday.

Executive director Carol-Ann Flanagan says it's something the organization has had on its "wish list" for years, and it was made possible by a grant from the City of Burnaby and the Union of BC Municipalities.

"This will give our folks that don't have a roof over their head a chance to be clean," she said at a ribbon-cutting ceremony Tuesday.

"We are very, very happy and proud that we're able to offer this service to our guests."

She added the society hopes to soon resume some of its other services that have been on hold during the pandemic, like foot care and haircuts. While the shower will be parked outside the church for now, the reason it's mobile is because the plan is to be able to travel to wherever there's demand.

Pssssst we have big news coming up! Here is a sneaky peek at the newly arrived mobile shower unit for our new Shower Program 🚿 Stay tuned for the big launch coming soon!!! pic.twitter.com/Lpa9GWnbeD

Burnaby Mayor Mike Hurley said access to a shower is something that he, and so many others, takes for granted.

"It's so important to bring dignity to people who are on our streets, to those who are less fortunate," he said. "It's these simple things that make such a difference in the lives of people."

Kudos to @BurnabyHomeless for bringing the very first mobile shower program to Metro Vancouver! While many of us may take a hot shower for granted, for those in need, this program will provide a sense of respite and dignity to people in tough situations. pic.twitter.com/tjF98jQYn8

Jayson Prefontaine is a volunteer with the society who says he first got connected to the organization when he needed help himself,

"It's going to be great for the community, it's going to do a lot of good," he said. "It's definitely needed."

He took the inaugural shower, exiting the mobile unit to a round of applause.

"I feel clean," he said, adding the water was hot and the pressure was good.