New analysis commissioned by a group that has protested the school and speculation tax is painting a new picture of Metro Vancouver's weakening real estate market.

According to numbers released by a group called "STEPUP Now" -- which says it is a non-partisan, not-for-profit society that opposes political parties that divide and weaken communities  -- Metro Vancouver properties have lost an on-paper value of nearly $90 billion.

The data was compiled by Paul Sullivan, a senior partner at Burgess, Cawley, Sullivan and Associates Ltd., who specializes in commercial real estate and property tax appraisal.

West Vancouver and Vancouver saw the biggest dips of market value at 14.68 per cent and 13 per cent respectively.

"While the government’s goal may indeed be to bottom out the housing market in an attempt to somehow address the complex issue of affordability, they are simply removing billions of dollars from the B.C. economy, to everyone’s detriment," said Sullivan in a release from STEPUP.

The group has organized a protest outside Attorney General David Eby's riding office Tuesday night during an open house.

It's not the first time the group has targeted Eby. It has staged similar protests before, organizing a rally outside a talk by Eby at the Vancouver Club in March to protest the speculation and school taxes.

But the data highlighting the loss in value come as Metro Vancouver's one booming real estate market slows down.

The Real Estate Board of Greater Vancouver said there were 1,829 sales in April, which is a whopping 43 per cent below the 10-year sales average for April. 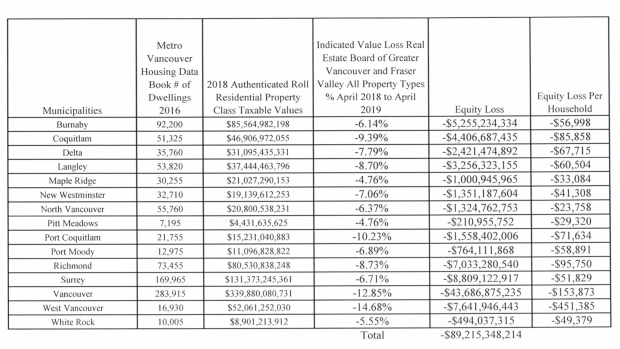