Media diversity initiative among B.C. gender-equality projects to get cash 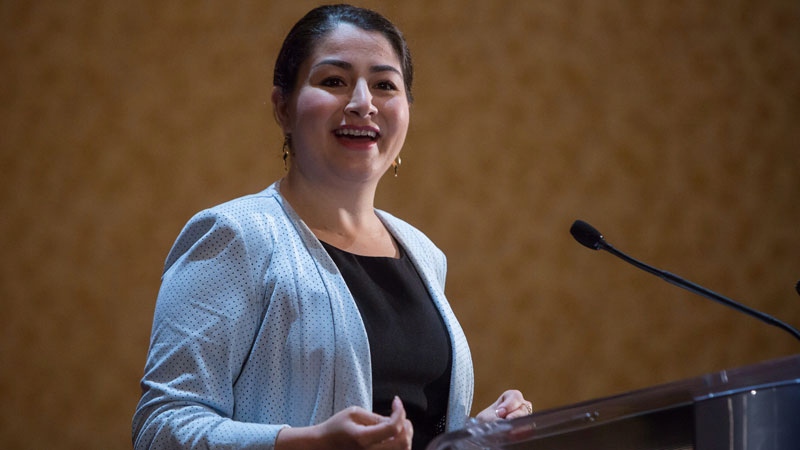 Maryam Monsef, Minister of Status of Women, makes an announcement regarding funding for seven projects that will help advance gender equality in B.C during a press conference in Vancouver, B.C., on Friday September, 2017. (The Canadian Press/Ben Nelms)

VANCOUVER -- A project to increase diversity in Vancouver's news media is among seven gender-equality initiatives in British Columbia that have received a total of $2.2 million in federal funding.

The Multilingual Orientation Service Association for Immigrant Communities, or MOSAIC, says the project will address issues including discrimination, stereotyping and lack of representation of female experts.

Studies have shown that male experts are interviewed by the media far more often than female experts, said Ayesha S. Chaudhry, a MOSAIC leader and a University of British Columbia associate professor in Islamic and gender studies.

"It's really important that we have a diversity of voices, not just in terms of gender, but class, sexuality and race, so that the people who are watching the news see themselves represented and their concerns and their perspectives are also captured," she said.

The project will urge media to increase female representation and train women academics on speaking with reporters, she said. It will also develop a framework on reporting on violence against women.

Status of Women Minister Maryam Monsef and Justice Minister Jody Wilson-Raybould announced the funding in Vancouver on Friday. Monsef has been travelling the country giving cash to groups working to advance the equality of girls, women and people who don't conform to a specific gender.

"The greater purpose of this tour, for me, has been to hear from organizations and leaders on the ground how as a government we can be part of your success -- how we can get out of your way, but catalyze the change that you are working towards each and every single day," Monsef said.

Other groups to receive funding include the Ending Violence Association of BC, which will launch a project to improve the way workplaces respond to gender-based violence, and the Women Against Violence Against Women Rape Crisis Centre, which will work to improve the justice system's response to sexual violence survivors.

Minister Wilson-Raybould says she and the government of Canada have been working hard to strengthen public confidence in the legal system and address gender-based violence.

The Minerva Foundation for BC Women aims to increase women leaders in the technology sector, while the Society for Canadian Women in Science and Technology said it will work to improve gender diversity in the science, technology, engineering and math fields in Vancouver.

Society president Fariba Pacheleh said the goal is for workers in these industries to be judged on the basis of their skills, not on their gender, skin colour, accent or physical appearance.

The aim is for an average woman to be able to advance at the same rate as an average man, she said.