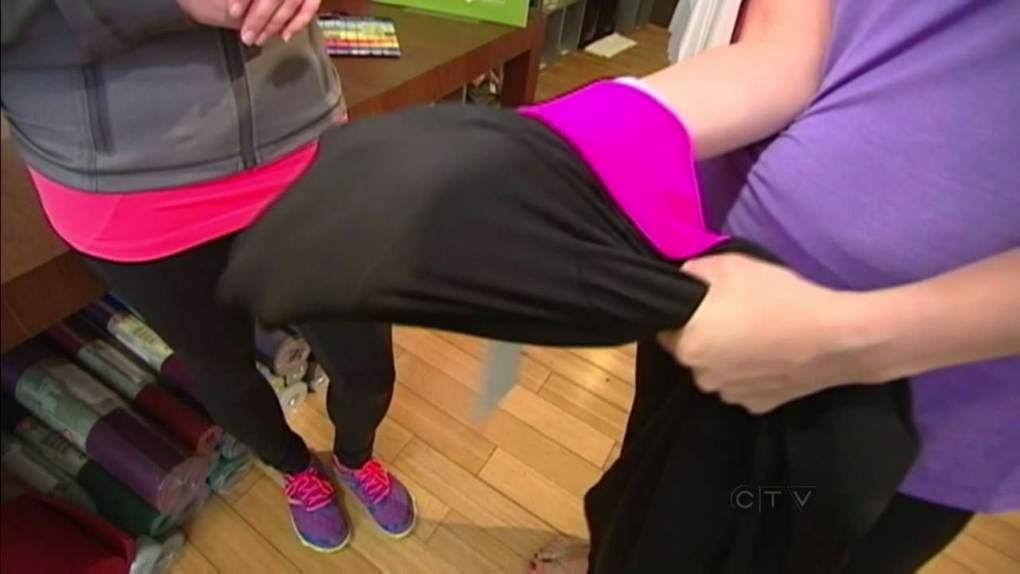 Customers still say their Lululemon pants are see through, but the company says it's because they're buying the pants too small.

Retailer Lululemon Athletica Inc. says customers could still be sporting see-through Luon yoga pants because they're buying sizes that are too small for them.

The Vancouver-based company said Wednesday there are still "a few negative comments" circulating on the Internet from shoppers who it believes are buying the wrong size.

The problem may be that "guests don't have the benefit of doing an in-store fit session with one of our educators to make sure the fit is right for them," the company said in a Frequently Asked Questions section of its website.

"The majority of feedback about the return of our black luon bottoms has been positive," it noted.

Lululemon says it has made "big changes" to its product development process since the see-through pants first grabbed attention in March.

But the troubles persist, and that might begin to cause problems for Lululemon's reputation, said Macquarie Capital analyst Liz Dunn who is a self-proclaimed "heavy user" of the company's products.

"We see a narrow window of opportunity for Lululemon to really fix quality," she said in a note.

Dunn said she's concerned with Lululemon's decision to tell customers to buy bigger sizes or that certain clothes aren't made for sweating in while others aren't made for running. She said not only does that create confusion but it also makes it inconvenient for customers who hurry from one exercise class to the next in the same pants.

"We believe consumers expect to be able to both bend and sweat in Lululemon's premium-priced athletic product," she said.

Dunn also pointed out that clothes once manufactured in Canada have now been outsourced to Asia to boost product margins. She acknowledged that customers may be paying more attention to product quality after hearing about the recall earlier this year.

Reviews on Lululemon's website have pointed out some of the flaws with the company's relaunch of its Luon pants.

"I was told by a sales associate that after the fabric was changed, most people had to go up a size for the sheerness to go away," wrote DCRunner16.

"Confused that just one size smaller would cause so much trouble with the fabric, I tried an eight. The eight was not only too big, but still sheer when I bent over!"

Numerous other reviews on the website outlined similar experiences with the pants.

"Did some bend-over tests and you could see my underwear and the tag on the pants," wrote a user called ILoveSun.

However not all of the recent reviews were negative and some customers questioned why so many others were still claiming their pants were see-through.

The quality of the Luon fabric has become a significant problem in recent months, resulting in several lawsuits accusing the company of disclosure shortcomings that artificially inflated the stock price of the company.

Lululemon pulled its black Luon pants from stores mid-March, which meant removing 17 per cent of its woman's pants inventory. Since then, the company has said that the fabric used in the pants did not meet their standards.

The company then said it began testing and assessing all Luon products to ensure they meet "revised specifications for modulus (stretch), weight and tolerances."

It has also stationed employees at factories to ensure that the new standards were being met.

Last month, Lululemon chief executive Christine Day announced her plans to leave the company once a successor was found. The company also recently delisted from the Toronto Stock Exchange.