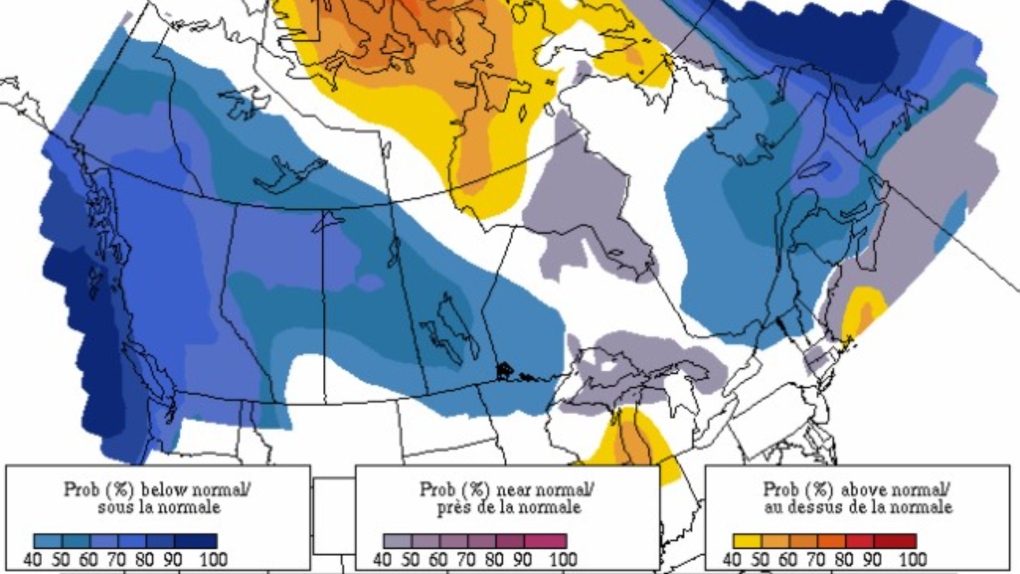 An Environment Canada heat map showing the likelihood of temperatures being colder, average or warm from March through May 2022. (Environment and Climate Change Canada)

B.C.'s Lower Mainland could be in for a colder-and-average spring thanks to a lingering La Nina weather pattern, according to the latest seasonal outlook from Environment and Climate Change Canada.

The agency's spring forecast calls for some chillier temperatures from March through May, though meteorologist Doug Lundquist noted the weather tends to fluctuate "a bit like a rollercoaster" at this time of year.

"Weather has ups and downs, and there will be plenty of warmer periods in there as well," Lundquist told CTV News over the phone from Kelowna. "We're definitely on a warmer trend now."

If the weather pattern persists over the coming weeks and months, Lundquist said it could work against the natural progression of rising spring temperatures, causing them to dip a few degrees colder than usual.

"Instead of having, for example, temperatures in the double-digits, we might see them progress into the high single-digits, with frosty nights again," he added.

Forecasters are predicting a colder spring with 70 to 80 per cent confidence, according to an Environment Canada heat map (LINK), but Lundquist said there's still a chance temperatures could be average – or even warmer-than-usual – in the Lower Mainland.

"Climate change is tending to make a warmer world," he said, noting there are a number of wild card factors that cause variability in the weather.

As far as precipitation goes, Lundquist said there aren't clear indicators pointing to a wetter or drier spring, calling it "pretty close to impossible" to make rainfall predictions this year.

He stressed that daily forecasts are the most important ones to monitor, as many British Columbians learned during the extreme weather events last year last year.