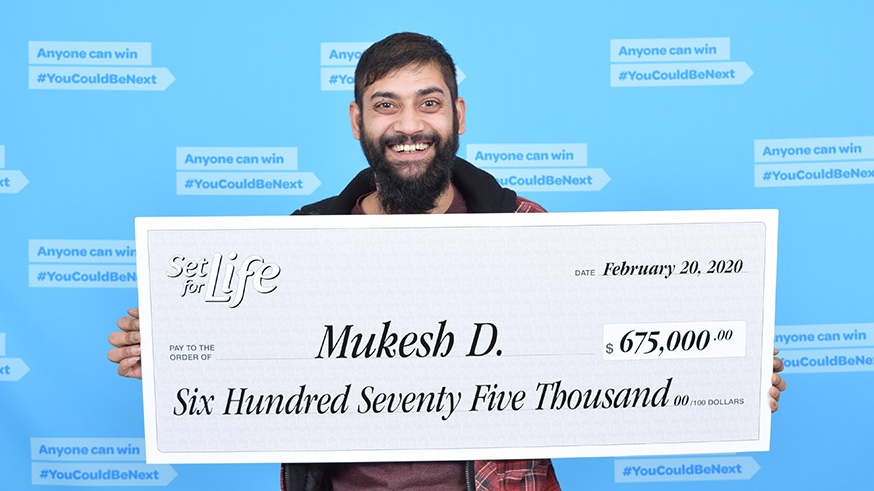 Mukesh Dutt won $675,000 with a scratch and win ticket his mother-in-law gave him for Valentine's Day. (BCLC)

VANCOUVER -- Some people go to great lengths to avoid their in-laws, but it's safe to say Mukesh Dutt isn't one of them.

That's because the Vancouver plumber has just become $675,000 richer thanks to a scratch and win ticket his mother-in-law gifted him for Valentine's Day.

Dutt told the B.C. Lottery Corporation he's planning a family celebration to show his gratitude, and might take the family on a camping trip up north as well.

The win will also help Dutt and his partner begin house-hunting sooner than they originally planned.

"My son Is only two months old, so being able to buy a home in Vancouver where I grew up and put a house over my family's heads is special," Dutt said in a statement provided by the BCLC.

The father said he's played lottery tickets before, but had never played a scratch ticket before receiving his winning Set for Life 20th Anniversary ticket.

"To be honest I wasn't even sure how to play at first," he said.

People who win the Set for Life prize have the option of receiving the weekly $1,000 payout or a single lump sum of $675,000. The weekly payouts are "not transferable, assignable or commutable in whole or in part," according to BCLC's rules.