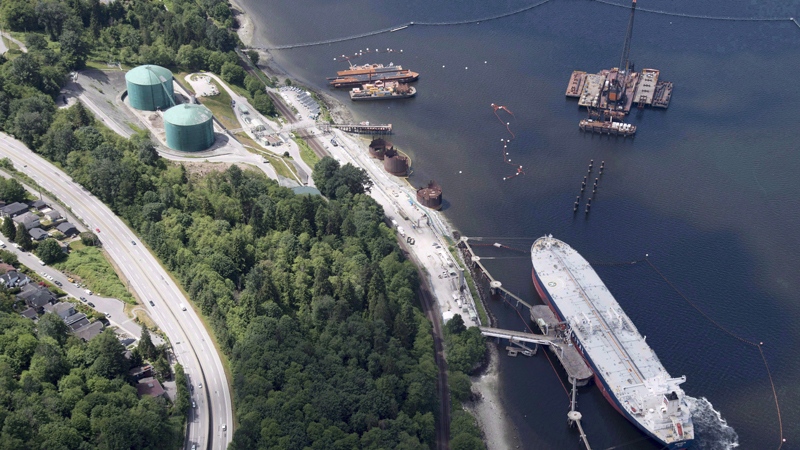 A aerial view of Kinder Morgan's Trans Mountain marine terminal, in Burnaby, B.C., is shown on Tuesday, May 29, 2018. THE CANADIAN PRESS Jonathan Hayward

OTTAWA - The federal Liberals are refusing to let two ministers overseeing the Trans Mountain pipeline appear before a committee of MPs to explain what's next for the expansion project after a court ruling threw its future in doubt.

Liberal MPs on the natural resources committee used their majority Tuesday to quash a Conservative motion that called for six special meetings to probe the pipeline's prospects and drill into why the government bought the existing pipeline for $4.5 billion, knowing a court decision questioning the approval process was pending.

As part of the proposal, Finance Minister Bill Morneau and Natural Resources Minister Amarjeet Sohi would have been summoned to explain what's next for the Trans Mountain expansion project after the Federal Court of Appeal last week overturned project approvals.

Conservative natural resources critic Shannon Stubbs said the court ruling was clear that problems with the approval process occurred during consultations with Indigenous communities that took place after the Liberals took office. She said the Liberals have failed to live up to their word that they would do what was needed to get the pipeline built.

She called the outcome of Tuesday's 80-minute meeting “utterly outrageous.”

“It's galling the Liberals haven't yet announced a plan to move forward,” she said.

Liberal MP Paul Lefebvre, appointed four days ago as the Sohi's parliamentary secretary, said the government is reviewing the court decision and will come forward “in the near future” with its plan.

Last Thursday, the Federal Court of Appeal ruled consultation with Indigenous communities was not robust enough for the cabinet approval of the project to be valid. The court also said the National Energy Board didn't properly consider the impact of an increase in oil tanker traffic off the coast of British Columbia that will result from an expanded pipeline.

“The court ruling indicates we still have a little more work to do,” he said, while insisting the pipeline is going to eventually be expanded.

Conservative MP Pierre Poilievre said now that Canadians own a pipeline they were told they needed to buy in order to ensure it could be expanded, they deserve answers from Morneau and Sohi about their strategy.

“We are all shareholders and we want a shareholder meeting,” he said.

NDP MP Richard Cannings said he wanted a study of the pipeline for very different reasons. The Conservatives want a plan to move the project forward while the NDP position is that any money that would have gone to the expansion be redirected to clean energy production instead.

The Liberals added consultations on the project in February 2016, including with Indigenous groups. Cannings said those consultations were undertaken by bureaucrats who didn't feel they could actually do anything with the requests they heard. Some communities had very manageable concerns, such as relocating the pipeline slightly, he said.

The Liberals listened to the communities but didn't act on anything they heard, he said.

The government hasn't said yet whether it will appeal the decision or take the steps outlined in the decision to try and get approval for the expansion back on the table.

The Trans Mountain pipeline carries crude oil and some refined products between Alberta and the B.C. coast. Kinder Morgan applied to build a second pipeline parallel to the first that will triple capacity, and Canada's hope is that much of that oil would end up in Asian markets.

Canada's heavy reliance on the United States for its oil exports - 99 per cent of oil export go to the U.S. - decreases the price Canada can get for its oil, an amount Trudeau says amounts to a $15 billion loss each year.