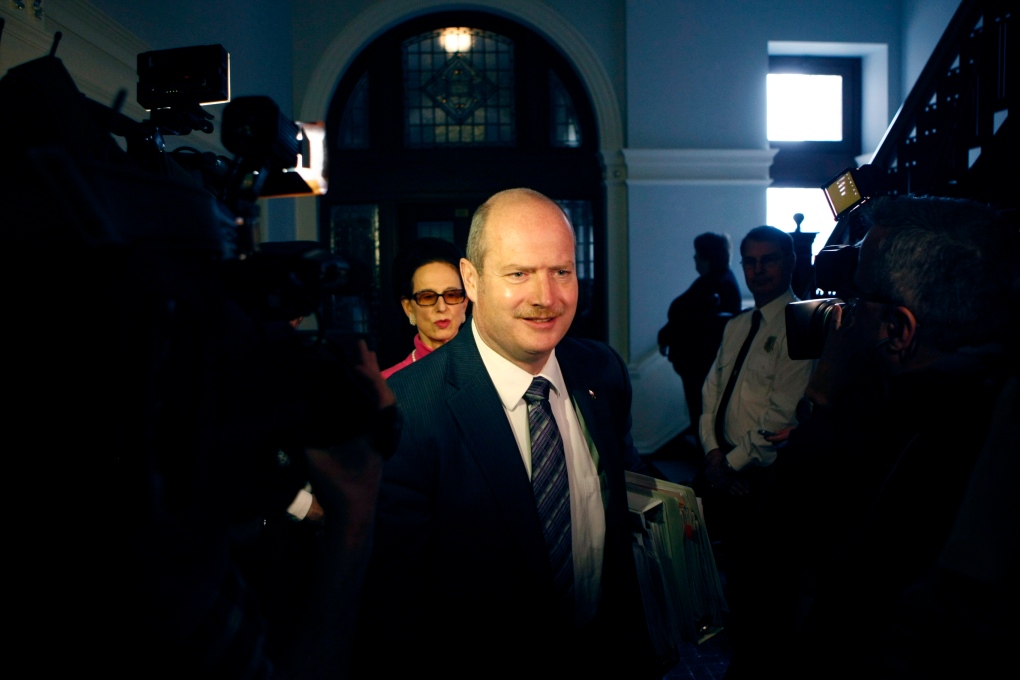 VICTORIA -- British Columbians can expect three consecutive deficit budgets if Adrian Dix's New Democrats are elected May 14 and there are no guarantees the province will have climbed out of the red by the fourth year either.

Dix released the NDP's complete election platform Wednesday, saying it will be a challenge to balance the books in the fourth year of an NDP government.

"We are inheriting a very difficult financial situation with a lot of question marks," he said. "There are very real challenges out there and our intention is to manage and to ensure that we meet those targets in the fourth year. But it's going to be, of course, a major challenge, but that is what we'll be tested on and that's what we intend to do."

The New Democrats are basing their own budget deficit projections on their analysis of the current Liberal budget, which has the NDP forecasting deficits of $790 million next year, $847 million in 2014-2015 and $452 million in 2015-2016 if they are elected.

Finance Minister Mike de Jong called the NDP's platform reckless spending that is beyond $3 billion and is testing the capacity of the Spend-O-Meter the Liberals installed to track the NDP's campaign promises.

"This isn't a platform, this is a weekend with the Kardashians," said de Jong, alluding to the money-is-no-concern outlandish lifestyles of the reality-show family.

"There's virtually nothing about how to build an economy to promote job creation and investment that will generate the wealth necessary to pay for the social programs that British Columbians value," he said.

Says the NDP platform document: "By removing the short-sighted sale of public assets from the budget and restating expenditure growth for vital public services to more realistic and prudent levels, the NDP estimates the real Liberal deficit to be $790 million in 2013-14, $847 million in 2014-15 and $452 million in 2015-16."

Dix said the platform provides a full accounting of the NDP's spending plans.

"Everything is accounted for," he said at a Victoria campaign stop near the legislature where he took few questions from reporters. "Our spending commitments are in balance with our revenue measures. So our platform will not add a penny to the Liberal deficit."

The New Democrats have spent the first week of the campaign outlining how they would spend $2 billion in revenues over three years to fund welfare, education and health-care reforms. The NDP are banking on taxes from corporations and banks and income taxes from the wealthy to provide the revenues to fund much of their spending plans.

The NDP's platform announcement included several new additions, including $10 million for a judicial inquiry into the sale of Crown-owned BC Rail.

The fallout from the Liberal government's sale of BC Rail led to the unprecedented police raid on the legislature in 2003 and the guilty pleas of two former Liberal government aides, David Basi and Bobby Virk, on fraud and corruption-related charges.

The platform document states an NDP government will move B.C.'s May fixed election dates to fall elections, with the next provincial election set for the fall of 2017, which gives the NDP several extra months in government if elected.

Three currently elected Independent MLA's called for fall elections recently, saying fall votes ensure governments can campaign on budgets that have been debated and passed by the legislature.

The platform also says an NDP government will create a ministry of women's equality and take pressure off the courts by expanding the use of duty counsels and dispute resolution services.

The NDP platform does not contain specific job-creation targets but the party maintains its reforms will create jobs.