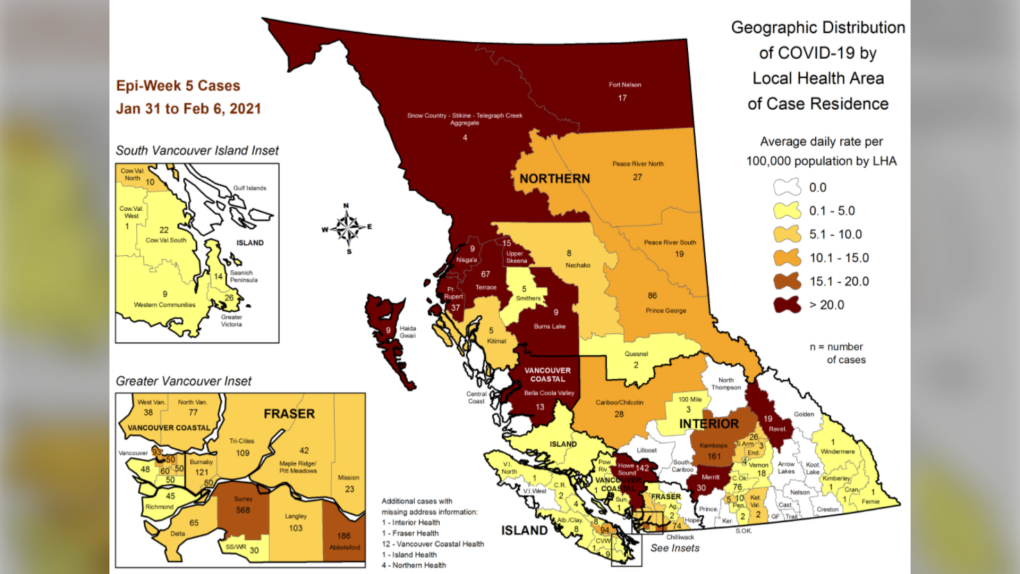 Geographic distribution of COVID-19 by local health area of case residence for Jan. 31 to Feb. 6. (BCCDC)

VANCOUVER -- COVID-19 clusters in Whistler and some regions of B.C.'s Interior slowed their spread last week, but several regions of the province are still seeing high rates of coronavirus transmission.

These are some of the takeaways from the B.C. Centre for Disease Control's latest map of COVID-19 infection data, which covers cases detected in the province during the week of Jan. 31 to Feb. 6.

The map shows the total number of cases recorded in each of the province's "local health areas" during the week in question, as well as the approximate number of cases per 100,000 residents recorded, on average, each day of the week.

The Howe Sound local health area, which includes Whistler, saw 142 new infections confirmed during the week that ended Feb. 6. That's equivalent to more than 20 cases per 100,000 residents per day - the highest per-capita range shown on the map - but it's also less than half of 287 total cases the region recorded during the previous week.

On Tuesday, health officials said transmission of the coronavirus in Whistler appeared to be slowing down, but urged residents to keep following public health orders.

Other regions that have seen notable clusters of infections in 2021 also showed improvement in the latest map from the BCCDC.

The Cariboo-Chilcotin local health area added 28 new cases in the last week, down from the 72 it recorded the week prior and from the 120 it added the week before that.

Likewise, the Fernie local health area, which saw a cluster earlier in the year, recorded only one new case of the coronavirus during the last week, down from 29 the week before.

Other regions in the Interior have been trending in the opposite direction, however. During the week that ended Feb. 6, the Kamloops local health area added 161 new cases of COVID-19, up from the 117 it added in the previous week, and the equivalent of 15 to 20 new cases per 100,000 residents, per day.

The less-populous regions of Revelstoke and Merritt each added more cases last week than they did the one before, recording 19 and 30 new infections, respectively. In both regions, the total number of new cases equates to more than 20 per 100,000 residents per day.

Joining those two local health areas and Howe Sound in the more-than-20-daily-cases-per-100,000-residents category are the Bella Coola Valley, which is part of Vancouver Coastal Health, and several regions in Northern Health.

From affordability to vaccinations, here are the priorities outlined in the 2021 B.C. throne speech

COVID-19 cases detected at another ski resort in B.C.'s Interior

Will B.C.'s COVID-19 'circuit-breaker' restrictions be extended beyond April 19?