A large fire on the shore of the Fraser River in South Vancouver lit up the sky early Saturday morning, sending a column of thick smoke into the air that was visible from kilometres away for those who were awake to see it.

The call came in around 3:30 a.m., according to Vancouver Fire Chief Karen Fry, who added that the fire appeared to be burning in a pile of wood recycling at a sawmill.

On Twitter, Fry gave the location of the blaze as "Ontario Street and the Fraser River." She said crews had activated a third alarm for the fire, and the Vancouver Fire Rescue Services fire boat had also responded.

There were no reported injuries as of 8 a.m., Fry said, adding that crews would likely remain in the area for several hours.

The fire chief warned of "lots of heavy smoke" in Vancouver's River District neighbourhood, and advised people living near the blaze to keep their windows closed and avoid working or exercising in the smoke.

"Any smoke is dangerous, especially to those with respiratory issues," Fry wrote on Twitter.

As Saturday went on, smoke lingered in the air over South Vancouver and parts of other Metro Vancouver municipalities. This, combined with smoke from wildfires near Hope and Manning Park, prompted an air quality advisory from Metro Vancouver.

The regional governing body said an "inversion" is trapping smoke from the South Vancouver fire near the ground, and added that high concentrations of fine particulate matter are expected to persist through the weekend.

"Smoke concentrations may vary widely across the region as winds and temperatures change, and as wildfire behaviour changes," Metro Vancouver said in a statement. 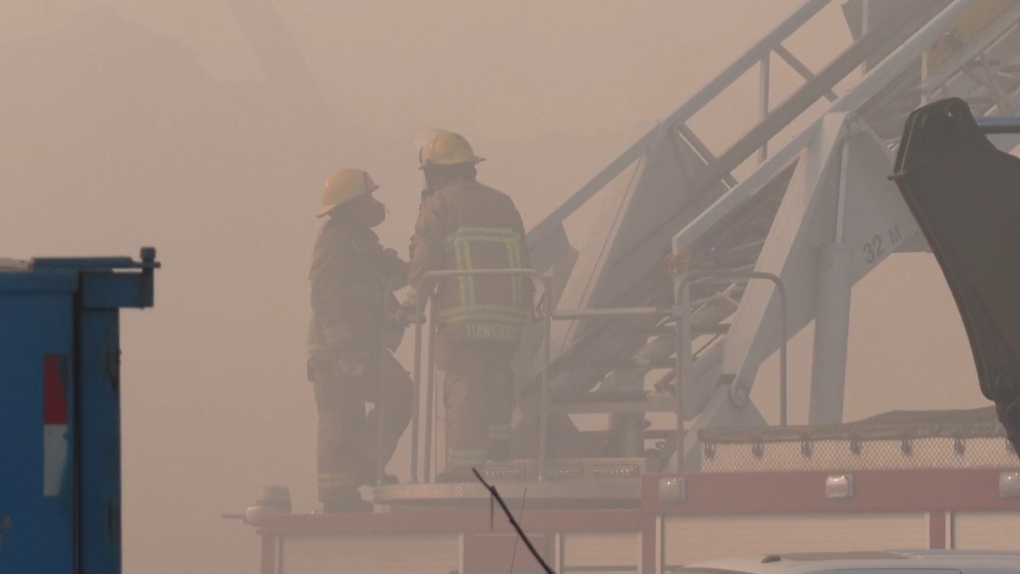 Vancouver firefighters work amid the smoke coming off a fire at a wood recycling facility in South Vancouver on Saturday, Sept. 10, 2022. (CTV)

Saturday's fire followed a busy Friday that saw crews respond to two simultaneous fires in and around the Downtown Eastside.

The first fire, at 218 Keefer St. in Chinatown, broke out around noon. Thirty-nine residents were displaced in that incident.

While firefighters were dealing with the Keefer Street blaze, they were also called to 6 East Hastings St. for another fire.

A #Vancouver fire at a wood recycling facility is producing considerable smoke that is impacting parts of the region. If you are impacted, consider running a portable HEPA air cleaner or visiting a public building with air filtration/air conditioning like a library or mall.

As always- any smoke is dangerous especially to those with respiratory issues.

Keep your windows closed, avoid being outside or exercising in the smoke.

@VanFireRescue crews are working hard on scene at a fire in a large pile of wood recycling. Fire boat 1 is also on sce pic.twitter.com/0NMq051y6L

The speaker of Russia's parliament warned Sunday that countries supplying Ukraine with more powerful weapons risked their own destruction, a message that followed new pledges of armoured vehicles, air defence systems and other equipment but not the battle tanks Kyiv requested.

Prime Minister Justin Trudeau says his 'heart breaks' for the people whose Lunar New Year celebrations were 'violently attacked' and whose lives were forever changed after a mass shooting in California.

Canada's Brooke Henderson has won her 13th LPGA Tour title. Henderson won the Hilton Grand Vacations Tournament of Champions on Sunday by four strokes. She finished the fourth round 2-under 70 for an overall score of 16-under par.

A funeral is taking place today for a Haitian man whose body was found earlier this month near an unofficial border crossing south of Montreal. Provincial police have said they believe Fritznel Richard, 44, likely died of hypothermia while trying to enter the United States.

Hundreds of people gathered on the front lawn of Graceland on a gray, chilly Sunday morning in Memphis to mourn the death and remember the life of Lisa Marie Presley, who died earlier this month.

People in parts of Eastern Newfoundland got a good workout Sunday morning shovelling out from knee-deep snow.

When scientists determined in the mid-1970s that the Mistastin crater in Labrador had lunar-like properties, the last Apollo mission had flown and it was too late for astronauts to take advantage of the site for training.