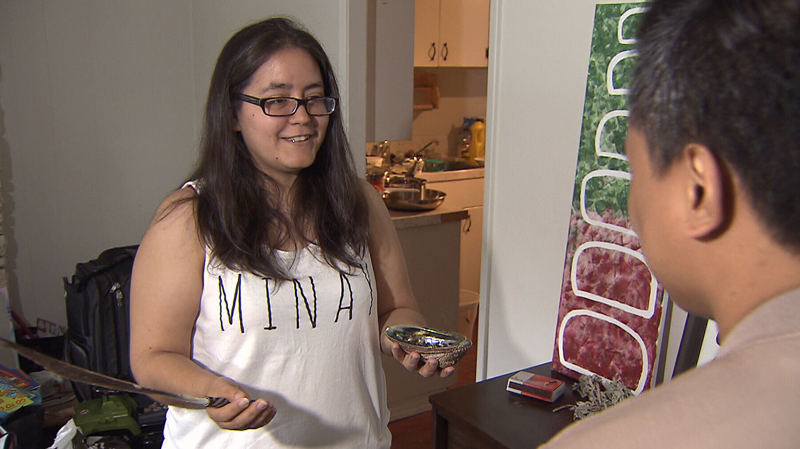 VANCOUVER -- The BC Human Rights Tribunal has ruled in favour of an Aboriginal woman whose landlord tried to evict her after she performed traditional smudging ceremonies inside her Burnaby home.

Tribunal member Pamela Murray also wrote in her decision that Smith endured "repeated comments over months based on stereotypes about Indigenous peoples" from Mohan.

Smith filed the human rights complaint in 2017 after she said she was served three eviction notices and faced continued pressure to leave her unit despite a Residential Tenancy Branch ruling in her favour.

According to the tribunal's decision from February, Smith, a mother of two and a member of the Tsimshian and Haisla Nations, was renting a basement apartment from Mohan for the first half of 2017.

In March of that year, Mohan was in the upstairs unit and texted Smith about the smell of pot coming from her apartment.

Smith said smudging was part of a "connection to and expression of her Indigenous identity" and part of her regular spiritual practice. She also told CTV News in 2017 that smudging was an important way to keep her son and daughter in touch with their heritage.

She testified that the practice of smudging involved her lighting sage in an abalone shell and fanning it with an eagle feather to create smoke. She said it "cleansed the negative energy from a person or space" and there was no ash, except for what remained in the shell. The sage created a white smoke that has a smell that lasts for a few hours, according to Smith's testimony.

Mohan told Smith the smell was "making (him) sick" and that she didn't seem concerned about his health, although he didn't testify about having any medical conditions, according to the decision.

Mohan also denied discriminating against Smith and said some of his comments were attempts at "inter-cultural dialogue."

"I find that Mr. Mohan was not a credible witness," Murray said in her decision. "Mr. Mohan also repeatedly tried to avoid acknowledging information that was adverse to his interests and what I see as patently obvious difficulties with his version of events."

Murray wrote that she found the nature of the discrimination "serious" and that Smith was "simply denied the right to enjoy her home, especially near the end of her tenancy." Smith ended up moving out of the unit in June of 2017.