'It's all I have left': Former BC Lion asks for public's help finding lost Grey Cup rings

VANCOUVER -- A former BC Lions offensive lineman is hoping the public can help him find his two lost Grey Cup championship rings.

Winning the Grey Cup is what every Canadian football player strives to accomplish in their career, and Cordell Mantyka was able to do it twice. He first won the title with the BC Lions in 1994, when they played against the Baltimore Stallions in the first-ever United States vs. Canada matchup. The second Grey Cup title Mantyka won with the Lions was in 2000 against the Montreal Alouettes.

With each win, he got a championship ring – a keepsake of the most cherished victories of his football career.

“I put a lot of sweat, blood and tears out on that field for 13 years and other than the memories, it’s all I have left," said Mantyka.

“It’s something that you work long and hard for and not everyone has the opportunity, even playing in the CFL, to get a Grey Cup ring.”

Each ring is unique to each player.

But now those rings are missing. In October, his wife Kristy donated clothing, something she does often.

“We get the calls – 'We are going to be in your neighbourhood' – so I am always putting some packages together,” Kristy said.

Unfortunately, she ended up unwittingly donating the rings among some other items. While Mantyka normally keeps them in a safety deposit box, he told CTV News he'd taken them out for an event and hadn't had a chance to put them back.

"I was hoping that we were wrong, so we ended up searching every nook and cranny but to no avail," said Mantyka.

"I have gone through every emotion you can possibly imagine because these were very important to my husband and now my donation has lost them," said Kristy. 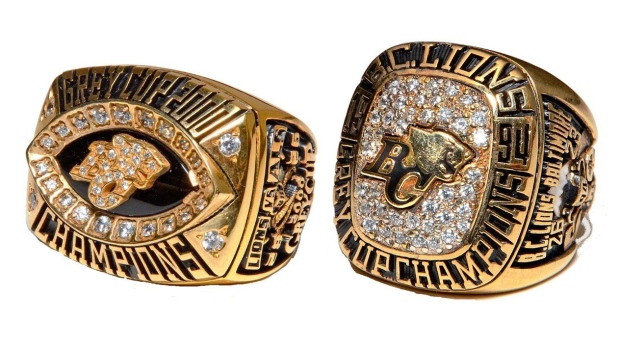 The items were picked up by the Canadian Diabetes Association, the couple was told they were likely taken to the Value Village in Langley.

At this point, the rings could be anywhere, so the couple is going public in the hopes that someone will recognize them and return them.

“We have tried every avenue to find them ourselves and we haven't been successful so we need some help," said Kristy.

Mantyka estimates the rings are worth about $10,000 each but to him, they’re absolutely priceless.

"The one thing they can’t take away from you is the rings you get from winning the Grey Cup," said Mantyka.

Mantyka says it's possible to get new ones but the process is long and expensive and they wouldn’t have as much sentimental value.

He hopes if someone does have them they do the right thing and return them to the Canadian Football League so he can have them back.

“I want this to be a story we share and laugh at one day but I am not laughing right now,” said Kristy.