Interest rates and anxiety on the rise in B.C.

The cost of housing is likely about to get worse, and there's new evidence British Columbians are getting more anxious about their finances.

It's a cliché in the real estate industry that now is always a good time to buy, but with interest rates jumping, would-be homeowner Tytan Bourke disagrees.

"The market's been so crazy I don't want to play the games people are playing," he told CTV News Wednesday.

Following the increase of a quarter of a percentage point, the country's big banks announced they'd be raising their prime rates by the same amount, to 3.95 per cent from 3.70. The increases come into effect Thursday.

"Inflation was running near the upper range, a little higher than we had expected in July," Bank of Canada Governor Stephen Poloz said.

The BoC says the Canadian economy is hot and inflation could rise. Fears about American trade were holding it back, but those fears eased when Canada signed on to the new NAFTA – the United States-Mexico-Canada Agreement.

"The global economy is normalizing, and monetary policy is moving to a more neutral stance in many places," Poloz said.

The idea is to cool the economy down, but it's a move that's going to hurt homebuyers.

That increase is compared to what they paid last month, but that rate has jumped five times since early 2017.

Compared to last spring, that same borrower would be paying $250 a month more. 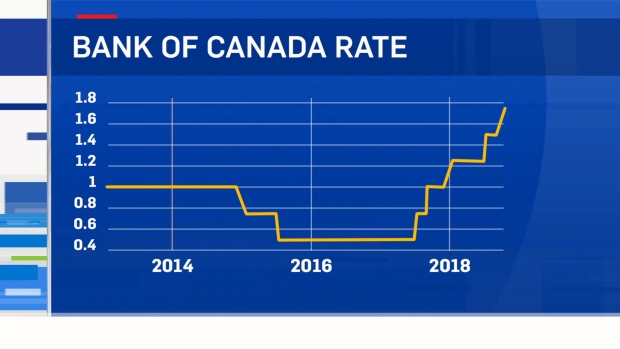 Maybe that's why a recent survey by MNP showed almost half of British Columbians are feeling the effect of rate hikes, and two-in-five are worried about financial trouble if they go higher.

"I think they're starting to see that there's an increase here or an increase there," said MNP's Grant Bazian.

"They're thinking, 'How am I going to be able to afford this?'"

Thanks to government intervention, prices on some homes have been dropping. If buyers can't afford to pay more, prices could drop even further.

Bourke says he uses mortgage calculators when he looks at homes listed online: "I'm trying to squeeze every point out."

Even a small rate discount can add up to a lot.

With a report from CTV Vancouver's Jon Woodward 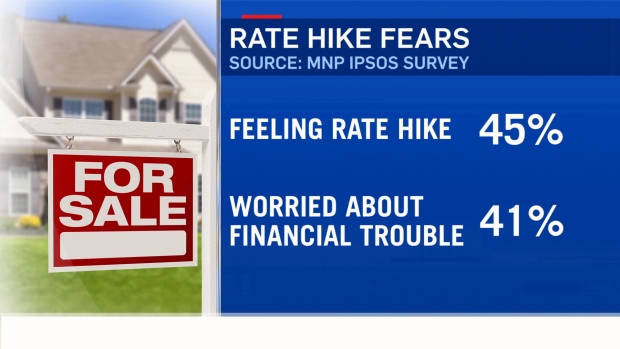