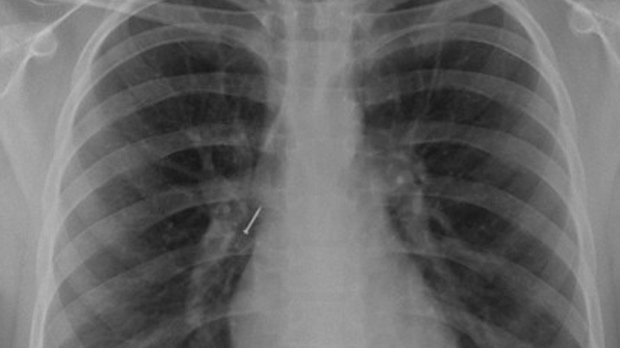 A thumbtack accidentally inhaled. A Guardian Angel pin stuck in the throat. A screw lodged in the bronchus.

If you think it was children rushed to emergency for choking on these items, think again: it was adults.

Global Choking Prevention Week runs Feb. 22 to 28, and Ludemann is stepping up his ‘Be Smart, Don’t Choke’ campaign.

His goal? To decrease the number of children, teenagers, and adults coming into the emergency room – or even dying – from choking on small objects.

“There has been huge improvement for prevention over the last few decades, but it’s not where we want it to be,” Ludemann said. “Warnings on products don’t work as well as we want and we can’t label everything… so that was the impetus for the website.”

Statistics on choking are not uniformly kept, but the ones that exist are alarming.

Choking was responsible for 4,500 deaths of all ages in the U.S. alone in 2009, it’s the third leading cause of accidental death in children in Canada, and 95 per cent of people who choke to death do so in their home environment.

While the majority of choking incidences occur amongst the very young and very old, Ludemann says it’s also common among adults and teens.

“Teens will want to put posters up above their bed, and they’ll stand on the rail and have thumbtacks held between their lips as they stand on their tiptoes,” said Ludemann. “And if they slip a little bit they gasp - and the thumbtack flies in.”

Education is key to preventing some of the tragic – and cringeworthy - incidences he has seen throughout his career.

Gel candies, hot dogs, grapes and disc batteries are some of the biggest hazards for children, while holding objects between the lips is one of the biggest risks for adults.

In some Islamic and Sikh countries, headscarf and turban pins pose a particular inhalation risk.

“We shouldn’t ever hold anything between our lips, but who hasn’t done that at some point?” said Ludemann.

Ludemann hopes that by continuing to expand his educational campaign, the number of tragic choking deaths will decrease in Canada – and around the world.

“As Nelson Mandela says, education is the most powerful tool that we can use to change the world,” Ludemann said. “I hope this campaign translates into less morbidity and mortality from choking.”

For more information on how to prevent choking visit the ‘Be Smart, Don’t Choke' website.