Indoor forest of fir trees part of YVR's $9.1B facelift 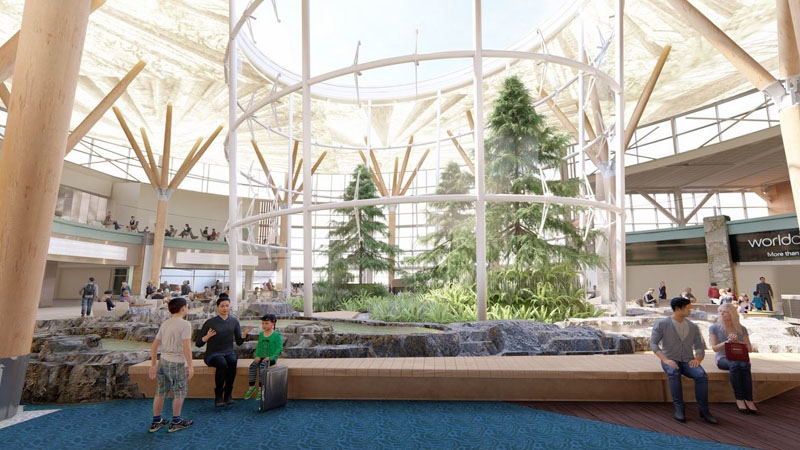 An indoor 'forest' is part of a 20-year plan for improvements to the Vancouver International Airport. (YVR / Twitter)

A "forest" of towering Douglas firs is part of a $9.1-billion overhaul of the Vancouver International Airport.

The display will allow visitors to the Vancouver area to immerse themselves in nature without even leaving the terminal. It will likely be the largest indoor planter in the world, according to the Vancouver Airport Authority's vice-president of engineering.

The trees will live within the terminal, but the area will have a hole in the ceiling to allow for snow and rain to fall.

"You'll be able to actually walk outdoors inside the terminal," Don Ehrenholz said.

The forest is part of a 20-year-plan for a YVR expansion.

Ground was broken Thursday on a sustainable parkade, which will include geo-thermal heating and spots for electric vehicles. The parkade will have room for 2,200 vehicles, more than 600 spots for rental vehicles and some spaces for electric cars.

It will also house a rainwater harvesting system.

"We'll store up to 10 million litres of water that we can use for cleaning cars, watering plants and even fighting a fire in the event of an earthquake," said Craig Richmond, president and CEO of the Vancouver Airport Authority.

Also in the plan are runway expansions meant to make takeoffs and landings safer. Runways will be lengthened by 300 metres at each end, a measure Ehrenholz said will help prevent crashes.

The multibillion-dollar tab price tag covers a total of 75 projects to be completed over two decades. Those passing through the airport during construction are advised to pack their patience, as they could face inconveniences including lane closures near the terminal.

Construction updates and other information is available on YVR's website.

With a report from CTV Vancouver's Allison Hurst

Artist renderings: YVR to get a $9.1B facelift