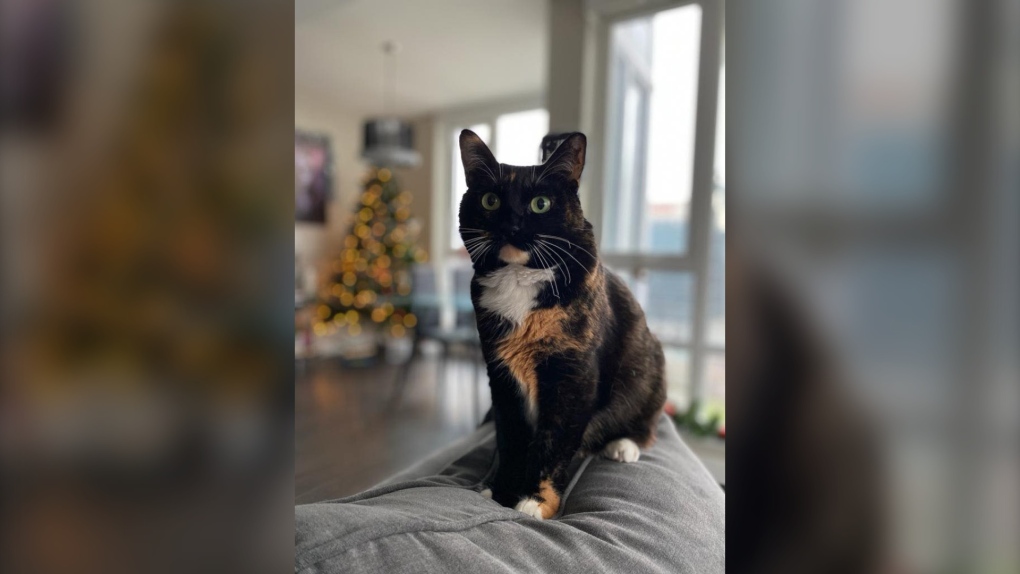 Ciara Chisholm spent her vacation worried her cat, Maple, wasn't being looked after properly after the cat sitting service she hired didn't respond to her messages. (Submitted)

VANCOUVER -- Ciara Chisholm flew off to Mexico last month to escape the cold with her wife and sister.

But instead of enjoying the sunshine, the Vancouver couple spent much of their vacation with their stomachs in knots, wondering whether anyone was feeding Maple – the needy, cuddly cat they left back home at their apartment.

Chisholm said she spent days trying to contact Kitty Home Care, the service she hired to feed Maple and clean her litter box, but received no response.

"We were losing our minds," said Chisholm, who grew up in Scotland and doesn't have any other family in town who could have helped. "I ended up going to the bathroom and crying at one point because I was so upset."

And they weren't the only Kitty Home Care customers who were left fearful and ultimately fuming by the service they received last month.

Steve Hiehn left home for six days in December, and doesn't believe his cat Mrs. Cheng – named after a famous Chinese pirate – was fed more than once.

Hiehn told CTV News they left out eight cans of food for the cat-sitter, and found only one had been opened when they returned home from vacation.

"The only reason our cat is even alive right now is because I left the bathroom faucets dripping," Hiehn wrote in an online review of the service. "I'm honestly in a state of rage."

Kitty Home Care owner Alex Reid has been running the business for years, visiting people's houses and apartments while they're on vacation and feeding their four-legged family members.

But after receiving several recent complaints, Reid admitted he dropped the ball in December and let some customers down, both by missing feeding appointments and dropping communication.

"I know I ruined some vacations," Reid told CTV News in an email. "I'm trying my best to make it right with those who are upset – even though I know they will never hire me again – because I truly feel terrible."

Chisholm said she was eventually able to get video confirmation that Maple was alive and well before they left Mexico – but things only got stranger when they finally arrived back home on Dec. 22.

"It smelled pretty bad when we walked through the door," she said. "There was lettuce and bits of McDonald's all over the floor and there was a pan on top of our stove."

The couple also found what Chisholm described as a "crack pipe" beside their couch, and said the whiskers on one side of Maple's head were singed.

Even more alarmingly, Chisholm said it appeared as though someone had been sleeping in their guest bedroom.

"We had to wash the sheets," she said. "There's just heaps of stuff that's not right with our place." 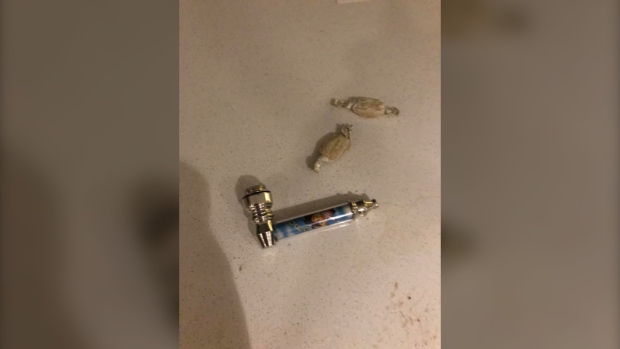 When cat owner Ciara Chisholm returned home from vacation, she found what she thought was a "crack pipe" in her home. Alex Reid, who runs the cat-sitting service Chisholm hired, said he accidentally left a pipe in Chisholm's home, but that it was only used for cannabis. (Submitted)

The couple paid Kitty Home Care to visit once per day for an hour at a time, but records obtained from their concierge show someone used their key FOB to access parts of the building several times on certain days.

Reid told CTV News he never slept at Chisholm's apartment, and didn't see any singed whiskers on Maple while he was caring for her. He did admit to leaving a pipe at the property, but said it was for cannabis.

"Yes, I had a marijuana pipe in my pocket that I guess fell out as I was sitting on her couch," he told CTV News. "I feel she's implying that I was smoking in her home which I would never do – and I rarely smoke in the first place, only to help me sleep when at home."

A post on Reid's Facebook page suggests he was homeless back in September. He has not responded to a question about his current housing situation.

Reid told CTV News he's working to provide refunds for the people who have complained about his service, and stressed that he's cared for hundreds of clients' cats over the years without issue.

There are only two previous complaints against Kitty Home Care on the Better Business Bureau website, one from July 2017 and another from December 2018.

He blamed last month's problems on an unexpected illness. Reid said he suffered food poisoning, which took him out of commission for days with no backups around to help out.

"For some reason my backup sitters weren't available," he said. "Very frustrating. There are always lessons every year."

When asked why he didn't inform his clients that nobody would be feeding their pets, which might have allowed them to make other arrangements, Reid said: "I should have done that. I failed on that front."

While she's happy that Maple is safe, fretting about the beloved pet while thousands of kilometres from home cast a dark shadow over what was supposed to be a sunny holiday.

"I was just so entirely helpless," she said. "It really ruined a large part of our vacation."