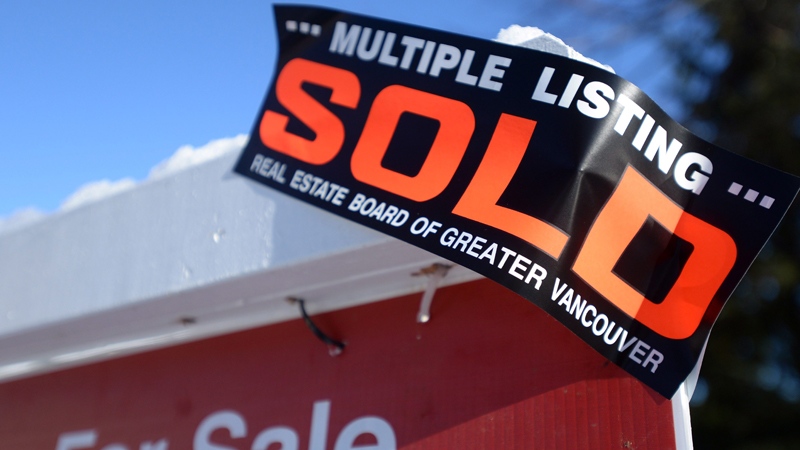 A real estate sold sign is shown outside a house in Vancouver, Tuesday, Jan. 3, 2017. THE CANADIAN PRESS/Jonathan Hayward

The share of household income required to cover mortgage payments, property taxes and utilities in the Greater Vancouver Area reached a record high of 87.8 per cent in the first quarter, rising 1.5 percentage points from the fourth quarter and up 9.5 per cent from the prior year.

“And things could get worse if - or when - interest rates rise further,” said the report by RBC chief economist Craig Wright and senior economist Robert Hogue.

A cooling in the market may take pressure off prices but it's unlikely to ease affordability tensions, they wrote.

The Bank of Canada is expected to increase its overnight rate by one percentage point to 2.25 per cent by the first half of 2019.

Growing household income and cooler housing markets in some areas should provide some limited offset.

Nationally, the proportion of income required to pay home ownership costs rose 0.4 percentage points from the fourth quarter to 48.4 per cent.

The move reversed a 0.3 percentage point drop in the fourth quarter.

“Well, the winning streak for housing affordability in Canada ended ... at just one quarter!” said the report.

The mortgage stress test that came into effect in January added downward pressure on property values that were still adjusting to new measures in Ontario including a 15 per cent foreign buyer tax and the expansion of rent controls to all private rental units.

RBC said home prices in and around the country's largest city should move slightly higher in the near term after declining modestly in the past two quarters.

Saskatoon, Ottawa, Halifax and St. John's, N.L., saw the largest declines in affordability in more than a year, but housing costs remained low at between 27 and 36.6 per cent.

“This shouldn't raise too many concerns at this stage because the level of the measure for each of these markets remains close to its historical average - indicating that any affordability-related stress isn't abnormally high,” said the report.

However, stress may be building in the Greater Montreal Area, which saw costs reach their highest point since 2011 at 43.7 per cent.

“Montreal's housing market continues to show all-round, solid momentum and steadily rising prices in the early part of 2018,” RBC said. “The flipside, though, is that it's becoming less and less affordable to own a home in the area.”

Ownership costs rose slightly in Saint John in the first quarter, but the New Brunswick city was the most affordable of those tracked by RBC at 25.9 per cent.

Halifax affordability was resilient at 32.7 per cent, with a 1.2 per cent decrease in resales in the first quarter, compared to 13 per cent drop nationally.

Housing remains inexpensive outside Canada's three hottest housing markets - Vancouver, Toronto and Victoria, said a separate report from the Bank of Montreal. In most cities, property costs are less than four-times family income while mortgage payments consume less than 20 per cent of salaries, which is little changed from the mid-2000s.