Horgan government gets surge in popularity amidst pandemic: poll

VICTORIA -- A new poll suggests Premier John Horgan’s NDP government is enjoying a surge in popularity as health care and COVID-19 become some of the top issues affecting British Columbians.

It’s almost unthinkable — that in real estate-obsessed B.C. - something else would be top of mind. Yet Research Co. polled 800 residents - a representative sample - and found housing-related concerns dropping.

The same survey indicates Horgan’s approval rating is at 73 per cent while Liberal leader Andrew Wilkinson is at 48 per cent and Green interim leader Adam Olsen at 49 per cent.

Canseco said a big part of this is Horgan and the NDP’s handling of the COVID-19 pandemic in British Columbia.

With the next provincial election scheduled for Fall 2021, it’s too early to know whether the NDP will be able to hold on to their political popularity.

Telford said the NDP would need to show progress on the economic front and warned voters could become impatient.

Canseco echoed that sentiment adding it might be easier for the Liberals to rely on their economic track record to appeal to those worried about recovery.

However, there’s another issue in terms of capitalizing on that momentum for an election more than a year away.

The power of women

The data also showed a difference around gender. About 37 per cent of women polled said they support the NDP. The Liberals are at 22 per cent.

"If it was not for that gender gap, the Liberals could well be doing a lot better, and maybe even doing better than the NDP," added Telford.

Canseco also pointed out that several of those considered "old guard" in the Liberal party won’t be seeking re-election. He acknowledged that could attract new voters.

"When some of the people who are deserving of the reputation that the BC Liberals have right now, particularly with women and young voters when some of those people retire, it might actually be easier for Andrew Wilkinson to establish that connection with voters, but we're still a few months away from that.”

The online poll was conducted from May 23 to 25 and has a margin of error of plus or minus 3.5 per cent, 19 times out of 20. The data has been statistically weighted according to Canadian census figures for age, gender and region in B.C. 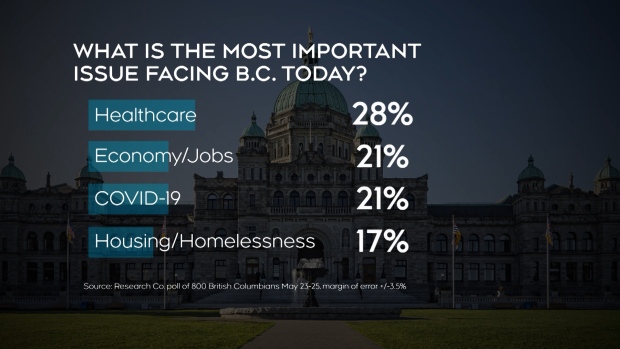 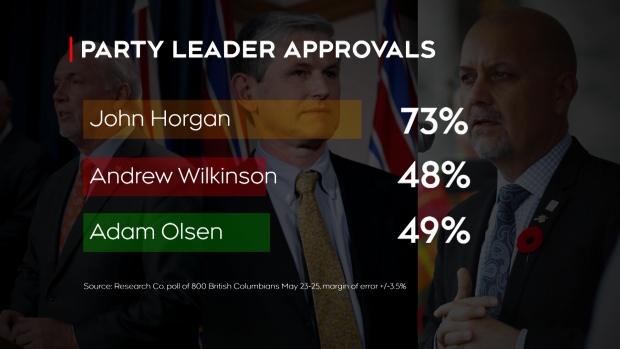 B.C. could allow outdoor gatherings, sports and some religious ceremonies in coming weeks

COVID-19 vaccines: Phone lines jammed as 1.7 million calls made to register for appointment in B.C.

Poll suggests 63% of B.C. residents willing to get COVID-19 vaccines right away