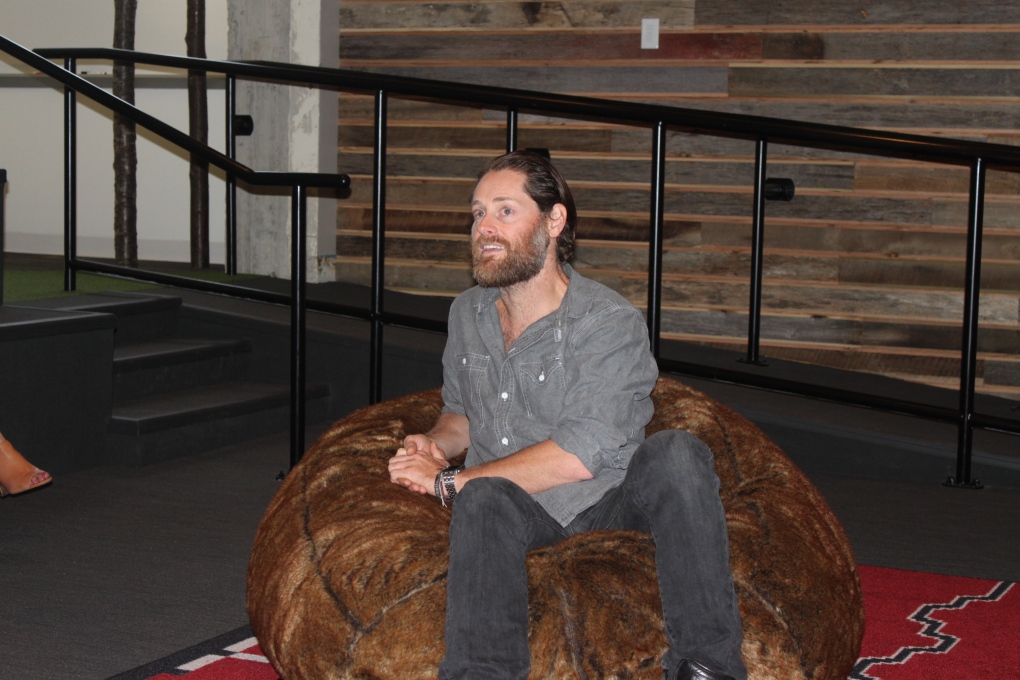 HootSuite CEO Ryan Holmes spoke to reporters from a beanbag chair in the company's new headquarters on Tuesday.

From the outside, HootSuite’s new second headquarters on 5th Avenue near Main Street doesn’t look like much. Of course, the same could be said of the still-new 8th Avenue headquarters the company opened last year. As was the case with that facility, it’s what’s inside the new location that has the company excited.

HootSuite invited members of the media inside its new office on Tuesday to see the aesthetic CEO Ryan Holmes describes as “1950s ski cabin in the summertime” and to talk about the company’s growth.

The employees based in the new office on the third floor of 111 E. 5th Ave. hadn’t seen it fully furnished until they moved in last month, Holmes said.

“We wanted to surprise and delight a lot of people,” he said. “Prior to coming over I think a lot of people thought they were getting moved to the less-glamourous, boiler room office.”

That’s hardly the case. Like HootSuite’s 8th Avenue headquarters, the 5th Avenue facility has a full kitchen and lunch room with a stage and wine and beer on tap for Friday evening office parties. It doesn’t have the office gym or yoga room or the rooftop deck, but it does have a lounge with faux-fur bean bag chairs and an electric fireplace.

The ski lodge comparison is apt, but so too would be any rustic Canadian wilderness setting. The plaid couch cushions and antique skis, snowshoes, fishing gear, and oil lamps spread around the office are as evocative of rural Quebec or Ontario as rural British Columbia. There’s even an “outhouse” near the centre of the room. Thankfully for the staff, it’s intended to be decorative, not functional.

Of HootSuite’s roughly 600 employees worldwide, 90 per cent are based in Vancouver. Holmes said the company’s goal is to keep its staff as close together as possible to facilitate collaboration. While it would be ideal to have just one Vancouver office, having two within three blocks of each other is the next best thing, he said.

Holmes said HootSuite will be looking to take over more space in the 5th Avenue building and in the Mount Pleasant neighbourhood as it continues to grow. He said he could see the company eventually developing a campus of buildings in the area.

“That’s effectively what the campuses that LinkedIn, Google, and Facebook have is a collection of buildings within close proximity sharing services and other stuff where people can really quickly connect,” Holmes said. “I look at this block that we’re in and I think that there’s a lot of potential, so who knows what we could do out of this?”

If HootSuite continues to grow at the rate it’s projecting, it might need to build a campus sooner rather than later. The company has been adding 10 new employees per week and hopes to fill 154 positions in the next three months.

To help achieve that goal, the company will hold an open house at both headquarters on Wednesday, Aug. 27, from 5 to 7 p.m. The company’s last “HootHire” event, held in March, attracted 1,200 prospective employees. The company received 4,000 resumes after the March event.