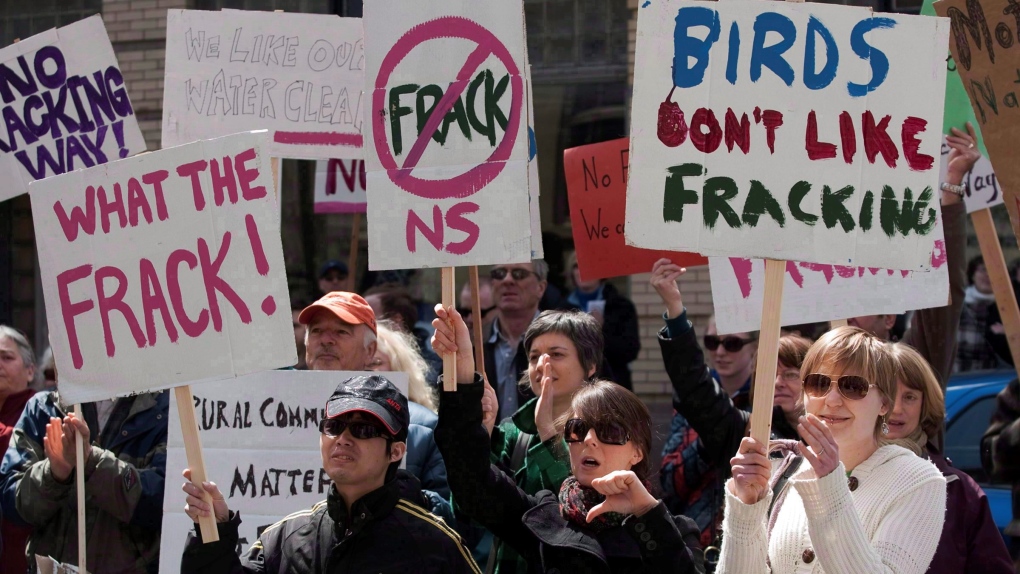 Protesters gather outside the Nova Scotia legislature in Halifax to show their opposition to the use of hydraulic fracturing or fracking, on Friday, April 22, 2011. (Andrew Vaughan / THE CANADIAN PRESS)
VANCOUVER -

A new study has found homes close to fracking oil and gas wells in British Columbia have higher levels of certain organic pollutants, which may lead to short- and long-term health effects.

Elyse Caron-Beaudoin, lead author and a professor in the department of health and society at the University of Toronto, Scarborough, says researchers took water and air samples from the homes of 85 pregnant women in the Peace River area of B.C. for one week.

She says pregnant women were recruited for the study because of the potential negative health effects of living close to natural gas wells, including higher rates of pre-term births, low birth weight and heart malformations.

Caron-Beaudoin says results showed that air samples in the homes had higher levels of chemicals used in fracking such as acetone and chloroform, and those contaminants were found in their study subjects.

She says Canada is one of the largest producers of natural gas in the world using fracking, a process that injects fluids deep underground to release the gas, yet there are no studies on the potential health impacts of the industry.

B.C. has about 10,000 active wells, and the study says the area could potentially see an increase in their number to more than 100,000.