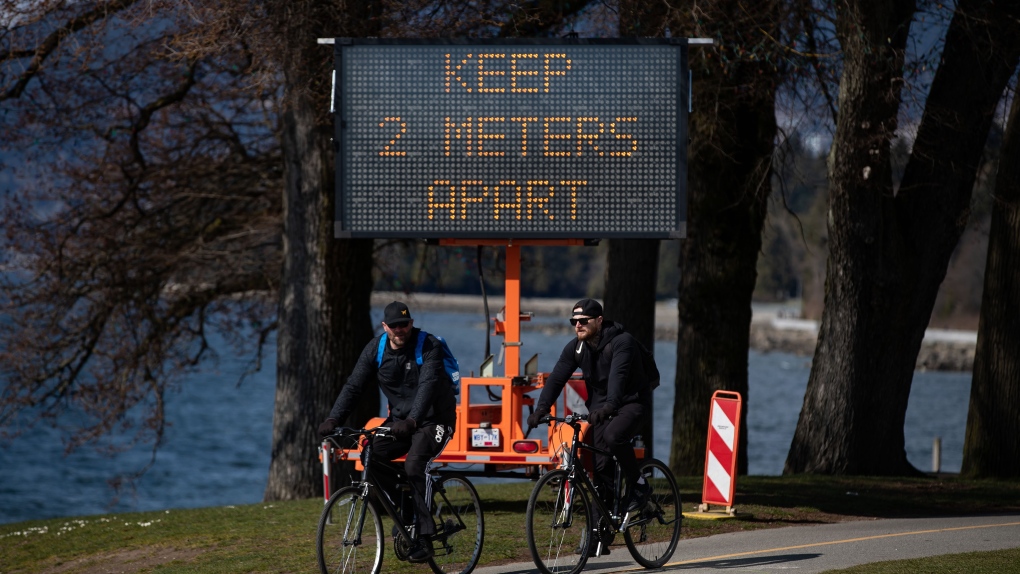 A sign warns people to social distance and keep at least 2 metres apart from one another due to concerns about the spread of the coronavirus, as two men ride bicycles on the seawall, in Vancouver, on Wednesday, March 25, 2020. (Darryl Dyck / THE CANADIAN PRESS)

VANCOUVER -- When COVID-19 fines for those breaking public health orders were introduced by the province in late August, British Columbians were told they can report offences to local bylaw officers.

Vancouverites, it seems, took that message to heart.

Since the city launched three reporting tools on Aug. 21 – the same day Public Safety Minister Mike Farnworth announced the fines – the City of Vancouver has received 3,660 reports of provincial health order violations, which averages to about 45 per day.

The city has several ways locals can report health order violations, including a call to 311, a report on the VanConnect mobile app or through a special webpage where concerned neighbours can detail the offence they've observed.

The online form for reporting violations has a thorough questionnaire, asking the person reporting to explain the type of health order violation they witnessed, where and when it happened, details of what happened and contact information. There's also an option to attach up to five photos of the infraction.

But that doesn't necessarily mean all the complaints received were legitimate or that fines were issued in each case. A spokesperson for the city explained to CTV News in an email that relevant departments will follow up on the report as required. For example, issues in a park would be forwarded to park rangers, while matters on private property or at a business might go to the city's property use inspection branch.

Then, departments will contact the Vancouver Police Department or Vancouver Coastal Health if necessary.

"City staff cannot issue fines for provincial health orders," the city spokesperson explained in an emailed statement. "City enforcement staff involve the VPD when dealing with people or businesses who are persistent offenders."

While the police might get involved, concerned residents shouldn't call 911 to report a health order violation. CTV News Vancouver has reached out to Vancouver police to find out how many fines they've issued in the city since Aug. 21.

"As you know, provincial health orders are always a last resort," Dr. Bonnie Henry said when she first announced the new health orders on Saturday. "But right now, these additional measures are needed."