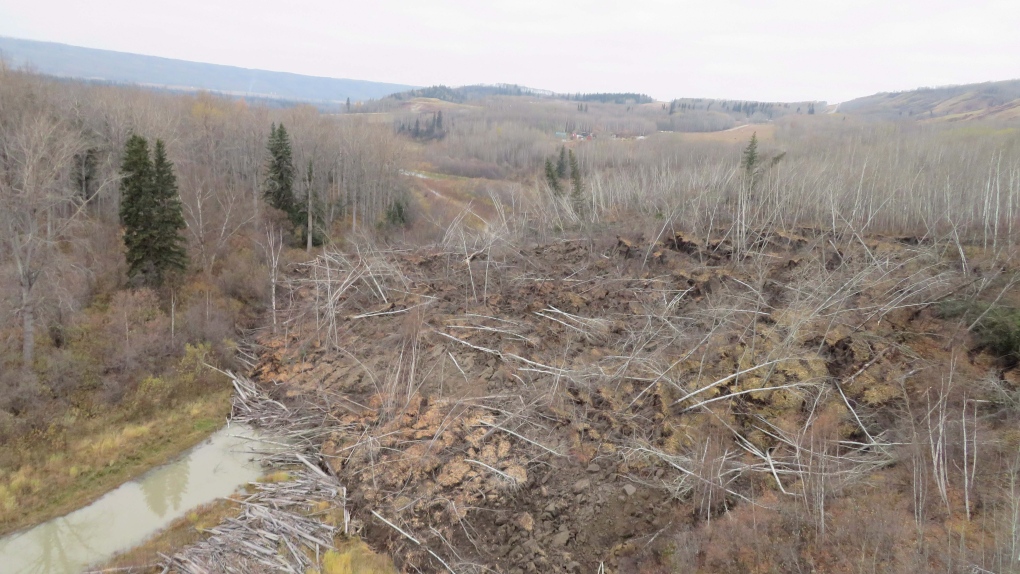 A slow moving landslide is seen inching down a hillside in northern British Columbia, prompting the evacuation of nearby Old Fort, B.C., in an undated handout photo. THE CANADIAN PRESS/HO-B.C. Ministry of Forests and Lands, Marten Geertsema,

FORT ST. JOHN, B.C. - Most residents of a northeastern British Columbia community threatened by a slowly moving landslide are still waiting to find out when they can return home, but a handful have received positive news.

More than 50 properties in Old Fort, just south of Fort St. John, were ordered evacuated Oct. 7, one week after a steep hillside above the homes had begun to slump, which ripped out the only road and cut power.

The Peace River Regional District has lifted an evacuation order covering one home near the hilltop, and alerts have been entirely rescinded for 12 other properties along two edges.

But the majority of homes, clustered along the banks of the Peace River at the foot of the slide area, remain under evacuation while residents wait for a geotechnical report.

That report was due last week but was delayed when the provincial government handed over a large amount of data to the engineering firm doing the work.

Once the geotechnical study is submitted, it will be sent for reviews, and the regional district will use it when deciding the next step for Old Fort Residents.