TSAWWASSEN, B.C. -- The provincial public safety minister, B.C. mayors and ordinary citizens are all frustrated with travellers and visitors flouting the instructions of the province’s top doctor during a global pandemic.

BC Ferries sailings were mostly full on Friday as driving routes out of Metro Vancouver were busy with vehicles, many of them towing boats and campers. Some people insist they were travelling on important errands that met with Dr. Bonnie Henry’s instructions to avoid non-essential travel to continue the downward trend of infections in the province.

“It certainly is disappointing and frustrating that we are seeing a minority of people who are ignoring the provincial health officer, Dr Bonnie Henry’s, instructions for this weekend that this is not the weekend to be travelling,” said a visibly exasperated Mike Farnworth, the Public Safety Minister. “It’s a weekend to stay close to home and to maintain your social distance.”

Despite the repeated exhortations to exercise close to home and avoid being closer than two metres to others, CTV News found a mixed bag of behaviour throughout Metro Vancouver.

At Deer Lake Park, visitors were few and far between, but in White Rock a steady stream of cars brought waves of people to the area — even though they couldn’t access much of the beach or the famous pier.

And, despite messaging and tweets from BC Ferries advising against non-essential travel and saying “the coast isn't going anywhere & neither should you,” CTV News spoke with several people who felt camping plans exempted them from the instructions to avoid travel because they wouldn’t be in contact with others.

⚠️ #TravelAdvisory ⚠️
The coast isn't going anywhere & neither should you.
Please don't travel if it's not essential.

Per @Transport_gc, we're screening for #COVID19. We don't have authority/ direction to stop healthy travellers. We need you to #StayHomehttps://t.co/MqZ4K3PQcX pic.twitter.com/HwxcLgLKhW

One traveller said his travel was essential because he was resuming custody of his dog, while another woman said they were returning to Campbell River after picking up a motorcycle. Another said he was returning to his home in Nanaimo after spending time with his father on the mainland, but planned to spend much of the weekend dirt-biking, camping and “enjoying nature.”

Mayors: Come some other time

“Please do not come now,” said Gibsons Mayor Bill Beamish. “ Not today or not this weekend. Not until the medical health officer tells us it’s safe for all of us to travel again.”

He’s one of many mayors fearing long-weekend travellers could bring COVID-19 to communities ill-equipped to handle outbreaks of the disease.

By the province’s own numbers, roughly one-in-five people infected with the virus need hospitalization.

“We look forward to your visit, and to the time when we’ll all be able to visit our friends and families in other parts of the province,” said Beamish. “We all need to work together to keep everybody safe and to keep our communities safe.”

Kelowna’s mayor echoed the sentiment, noting that he hasn’t even considered what a relaxing of the rules will look like since he hasn’t heard anything from Henry.

“It absolutely pains me to say this given that our economy is so dependent on tourism, but we have to ask people to follow the advice of Dr. Bonnie Henry an the provincial government and please stay home,” said Colin Basran. “Certainly, when the time is right, Kelowna will welcome visitors with open arms and we will be more than prepared to have you come and visit.”

One man’s frustration boils over

As political leaders use their platforms to discourage travellers and visitors on a sunny and warm weekend, a White Rock man is taking it upon himself to send a personal message discouraging visitors with a hand-drawn sign on the community’s busy main drag. 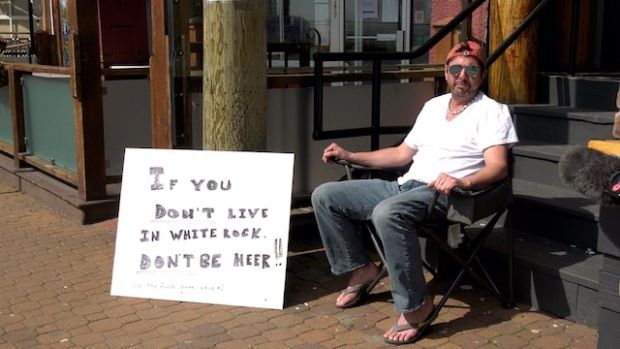 “I’m extremely frustrated,” Craig said to CTV News. “I personally locked myself in my house for 3 weeks now and all I’ve seen is thousands and thousands of people that just aren’t paying attention, that don’t care.”

While CTV’s camera was at the promenade, it recorded several people simply moving barricades and walking around them to access the beach, while dozens of people jostled against each other along the sidewalk.

“If you’re not in this community, stay out of this community — everybody needs to stay home right now, it’s really important,” insisted Craig. “I’m not a big person on being compliant with what the government says to do, but let’s just get it over with because I don’t want to spend my summer up in that room.”

The public safety minister, who’s also B.C.’s solicitor general, says bylaw officers are authorized to crack down on people in parks and other crowded places who are obviously violating the provincial order to keep two metres apart and stay home as much as possible.

Farnworth says police will also be enforcing the two-week mandatory quarantine for travellers returning to Canada by land and air.

“Obviously, we’ll review what happens after this weekend and there may be further steps that need to be taken because clearly some people don’t get the message,” he said. “That’s unfortunate because the vast majority of the people in this province are doing what they’re supposed to do.”