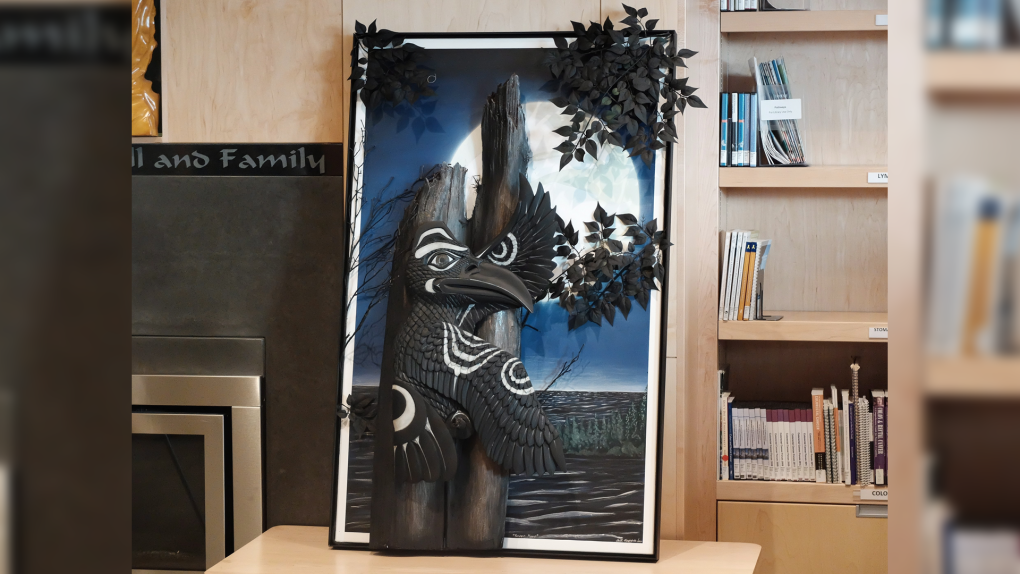 Artwork by Tsawout First Nation artist William Marrow that hangs at the BC Cancer Agency in Victoria is seen in this undated handout photo. (Kevin Sauve, BC Cancer)

VANCOUVER - Seeing a painting of two Indigenous women standing at the foot of a mountain and gazing at the moon instantly made Johnna Sparrow feel she was being supported as she dealt with breast cancer.

“I thought, 'That's just beautiful.' Because when you go through cancer you need someone standing beside you. There's no way you can walk that road alone.”

Sparrow, a member of the Musqueam Nation, saw the painting last year at the BC Cancer Agency during an unveiling of Indigenous artwork as part of a project aimed at welcoming Indigenous patients and their families, who often feel their culture is ignored.

The painting, called “Tipiskawi Pisim,” or “We are Moon,” hangs in the lobby of BC Cancer Agency in Abbotsford, B.C., and is among artwork prominently displayed at six cancer centres around the province, with funding from the Canadian Partnership Against Cancer.

Now, after a decade of consultations with Indigenous leaders, the non-profit group has provided $24 million in funding for similar projects and services for cancer agencies across the country, with one goal in mind: to bolster respect for Indigenous culture as a way to provide dignity and improve outcomes for Metis, First Nations and Inuit patients.

Cindy Morton, the partnership's CEO, said inequitable health care was identified as a major concern in its survey last year of 30,000 cancer patients from all jurisdictions, and Indigenous Peoples felt particularly marginalized, especially in rural and remote areas.

Every cancer agency across the country was involved in consultations to determine how best to respond to grim statistics among Indigenous Peoples, whose cancer rates are worsening while those among the general population are improving, Morton said.

An editorial in the European Journal of Cancer Care in 2016 quoted multiple studies saying the incidence of cancer has risen dramatically among Inuit, First Nations and Metis populations in the last few decades, with lack of screening programs and mistrust of health-care providers among the multiple factors involved.

“Yet, at the community level, a lack of culturally relevant educational materials and expertise contributes to a reported lack of awareness about cancer and successes in its prevention and treatment,” the editorial said.

Morton said Indigenous Peoples in northern regions and the Maritimes have the worst cancer outcomes, and Inuit have the highest lung cancer rate of any population in the world, adding second-hand smoke in small spaces is a big factor in a region with inadequate housing.

While smoking rates overall are decreasing across the country, they are increasing in the Northwest Territories, prompting the Canadian Partnership Against Cancer to start smoking cessation programs, especially among youth, Morton said.

Prevention is an important aspect of curtailing cancer rates, and Indigenous leaders have provided input on ways to raise awareness, she said.

“They have educated us in that if we want to talk to Indigenous people about drinking, smoking, healthy eating, we have to talk about it in the context of health and wellness.”

Morton said Ontario and British Columbia have led the country by incorporating Indigenous culture into their health-care systems when it comes to cancer, and projects in those two jurisdictions will be expanded to other parts of the country over the next four years.

“British Columbia has constructed an Indigenous cancer strategy that is unique,” she said. “It is inclusive of Metis, Aboriginal friendship centres, Inuit, although there are modest numbers, and First Nations. It has been co-designed between the First Nations Health Authority and the 201 bands they have reached out to, as well the cancer agency.”

Morton said mobile vans providing breast-screening around the province are increasing screening rates for Indigenous women, who are less likely to get a mammogram than non-Indigenous women.

Her group will work to expand that service elsewhere in Canada, she said.

“Our goal is to have Indigenous cancer strategies in all 13 jurisdictions by 2027, and have them implemented by then,” she said.

Gail Turner, an Inuit board member of the Canadian Partnership Against Cancer, said Metis, Inuit and First Nations are increasingly embracing the languages and traditions that were stripped away by colonialism so having their culture acknowledged by the health-care system goes a long way to making them feel accepted.

“The relationship with the land is being better understood, and the value for everybody being close to home and bringing (health) services close to home.”