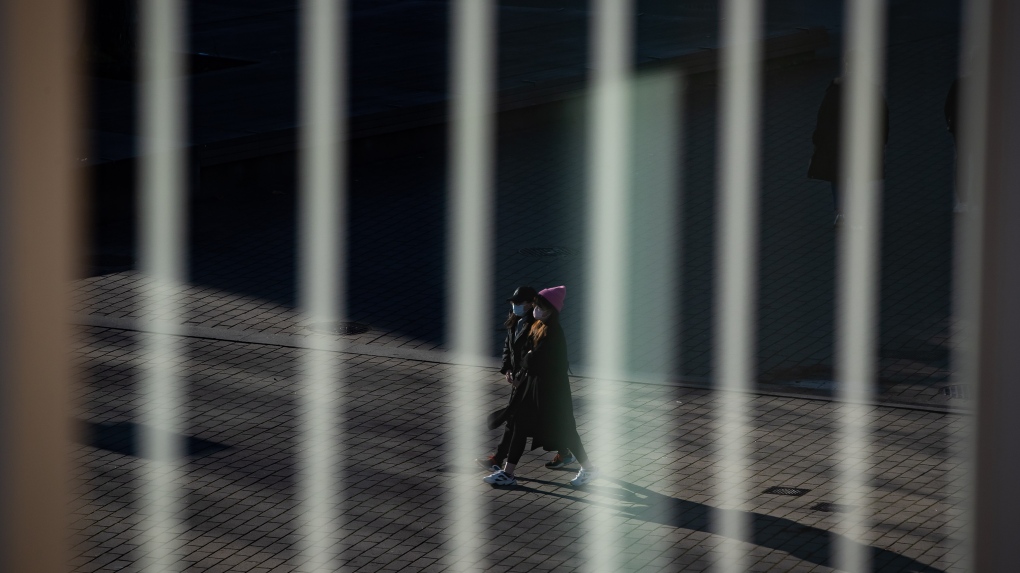 Students wearing face masks to curb the spread of COVID-19 are framed by lines on a window as they walk on campus at the University of British Columbia, in Vancouver, on Wednesday, December 8, 2021. THE CANADIAN PRESS/Darryl Dyck

The province's seven-day average for coronavirus-related deaths has been trending downward since reaching a 13-month high of 13 per day last week. The latest update from the Ministry of Health left the average at 7.4 per day.

The number of test-positive patients in hospital also decreased once again, reaching a four-week low of 744. That total includes both patients suffering from severe COVID-19 illness and those who tested positive incidentally after being admitted to hospital for reasons unrelated to the disease.

The number of COVID-19 patients in intensive care decreased by one, to 120.

Three of the latest coronavirus-related deaths were reported by Vancouver Coastal Health, and the other two were by Northern Health.

The provincial COVID-19 death toll now stands at 2,781, after one previously reported death was "removed from the total due to a data correction," the ministry said in a statement.

Another 782 cases of COVID-19 have been confirmed through testing over the last 24 hours, though daily infection numbers have not been considered an accurate measure of transmission since B.C. stopped testing most people.

Health officials believe transmission is decreasing, however, based on other metrics such as test-positivity and COVID-19 levels in wastewater.

The province's seven-day average for confirmed cases has dropped from an all-time high of 3,407 per day on Jan. 5 down to 857 as of Thursday.

As of 12 a.m., nightclubs and bars that were forced to close back in December have been allowed to reopen, and capacity limits have been removed from sports arenas, movie theatres and other venues.

Planned gatherings such as wedding and funeral receptions have also been allowed to move indoors. Previously, they were only allowed outside, and with strict limits on the number of attendees.

While announcing the changes on Tuesday, Henry noted the possibility of another variant that could throw a wrench into the province's progress.

So far, 90.5 per cent of eligible B.C. residents age five and older have had at least one dose of COVID-19 vaccine, and 85.5 per cent have had two. Fifty-six per cent of adults have also received a third dose or booster shot.