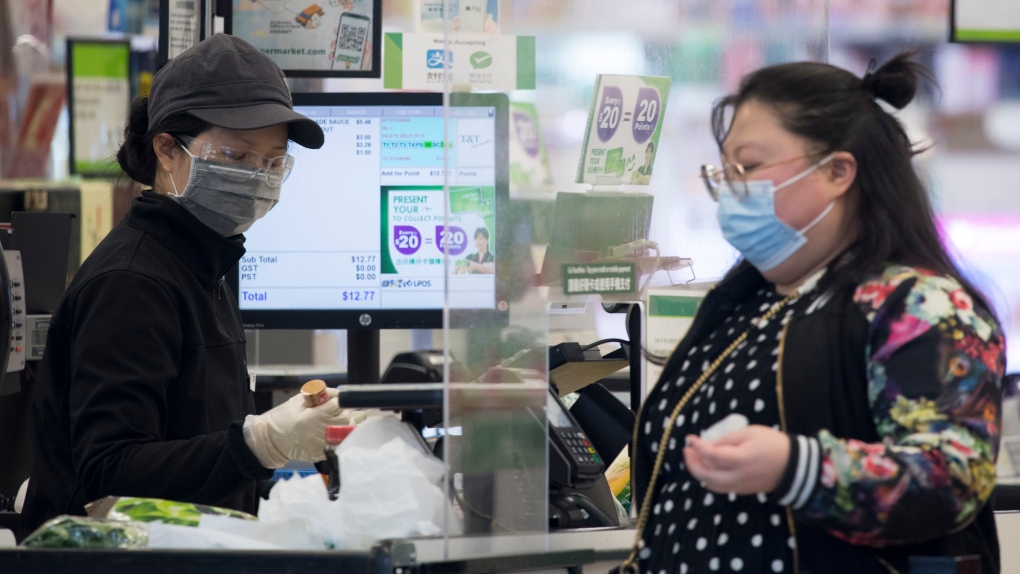 A grocery store worker wears a protective face mask and gloves as a customer stands on the other side of the plexiglass divider in downtown Vancouver Wednesday, April 29, 2020. THE CANADIAN PRESS/Jonathan Hayward
Vancouver -

Another 2,239 cases of COVID-19 and 18 coronvirus-related deaths were recorded across B.C. over the weekend, officials announced Monday after the government's vaccine card grace period came to an end.

The number of infectious COVID-19 patients in hospital decreased to 303, including 141 people in intensive care. That's down from 319 hospitalizations as of Friday afternoon, with 149 patients in ICU.

Officials did not provide a breakdown of the patients' vaccination status on Monday, but the unvaccinated consistently represent the majority of coronavirus hospitalizations.

"After factoring for age, people not vaccinated are 25.9 times more likely to be hospitalized than those fully vaccinated," the Ministry of Health said in Friday's update.

Officials also didn't include the number of patients who were hospitalized for COVID-19 and remain in hospital for treatment, despite no longer being considered infectious. There were 152 such patients going into the weekend.

Fraser Health and Interior Health once again recorded the highest numbers of COVID-19 infections, accounting for 857 and 525 cases, respectively, while Northern Health continued to see the highest rate of transmission per capita.

B.C. has now administered 7,802,535 doses of the Pfizer-BioNTech, Moderna and AstraZeneca vaccines, with 87.7 of eligible residents having received one shot and 80.5 per cent having received both.

British Columbians and visitors are now required to show proof-of-vaccination to take part in a number of non-essential activities, including dining in at restaurants or going to the movies, and as of Monday must do so using a government-supplied QR code.

The province's transition period, during which people were allowed to present their physical vaccine records from their immunization appointments, ended over the weekend.

Officials also announced four new COVID-19 outbreaks in health-care facilities Monday, at The Residence in Mission, Hallmark on the Lake in Abbotsford, Magnolia Gardens in Langley, and Cooper Place in Vancouver. Five others were declared over, leaving 21 active outbreaks across B.C.'s health-care system.

U.S. President Joe Biden and first lady Jill Biden paid their respects Tuesday at a makeshift memorial to the 10 people killed in the white supremacist attack in Buffalo, confronting again the forces of hatred he frequently says called him back to seek the White House.

Calgary police said in a statement issued Monday they have identified a suspect wanted in an incident that resulted in the death of a Calgary mother of five.

The body of 17-year-old Brittanee Drexel, who disappeared while visiting South Carolina's Myrtle Beach on spring break 13 years ago, has been found and a sex offender has been charged with murder, kidnapping and rape, authorities said Monday.

Today, there are two pieces of Quebec legislation that target religious and linguistic minorities. While he often talks about rights, Justin Trudeau has chosen to stand there, arms folded, and do nothing to defend people whose freedoms are being affected. He appears to be afraid of displeasing François Legault, writes former NDP leader Tom Mulcair in his latest column for CTVNews.ca.

Prime Minister Justin Trudeau says a soccer friendly between Canada and Iran next month in Vancouver is ill-advised. The merits of hosting Iran were raised by a reporter, citing families who had lost loved ones on Ukraine International Airlines Flight 752.