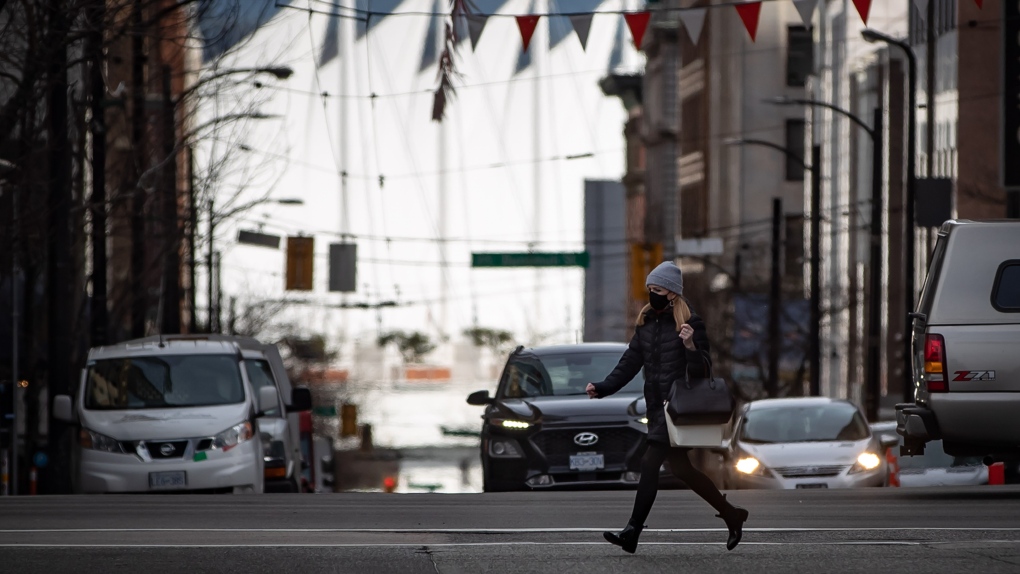 A pedestrian wearing a face mask to curb the spread of COVID-19 sprints across a street in Vancouver, on Monday, March 8, 2021. (Darryl Dyck / THE CANADIAN PRESS)
Vancouver -

Another 1,370 cases of COVID-19 and 25 related deaths were recorded across British Columbia over the last three days, as the province reached another vaccination milestone.

A full 90 per cent of eligible residents have now received at least one dose of COVID-19 vaccine, according to Monday's update from the Ministry of Health, and 85.3 per cent have received two.

The government recently announced that all eligible residents will be offered booster shots in the new year, though some – including those who received two doses of AstraZeneca – will be able to access a third dose earlier.

Eight of the deceased lived in the Fraser Health region, seven lived in the Interior Health region and five each lived in the Northern Health and Island Health regions. Vancouver Coastal Health, which has consistently seen the lowest per capita case rates in the province in recent weeks, did not record any coronavirus-related deaths over the weekend.

Once again, Northern Health experienced the highest rate of transmission of the health authorities. The province's latest cases were distributed as follows:

The number of infectious coronavirus patients in hospital, which reached a five-month high of 436 on Friday, remained steady, but the number of those patients in ICU decreased to 140 from 156.

The unvaccinated – who make up less than 20 per cent of the province's overall population, including those too young for any of the approved vaccines – continue to be vastly over-represented in B.C.'s COVID-19 cases, hospitalizations and ICU visits.

89 percent of people in critical care due to COVID-19 are not fully vaccinated.

For a full breakdown by age: pic.twitter.com/xFB2wciDww

The province is now working to contain 39 active outbreaks across the health-care system, the ministry said.