VANCOUVER -- Early estimates suggest vaccination against COVID-19 was effective in preventing about 80 per cent of cases in B.C. health-care workers and long-term care residents.

That's according to research presented by health officials Thursday during their latest monthly modelling update.

Data shared by provincial health officer Dr. Bonnie Henry and B.C. Health Minister Adrian Dix indicates there were "substantial declines" in infection among both groups within the first few weeks of receiving a dose of vaccine.

"Within two weeks of immunization, we start to see a dramatic change in risk," Henry said, adding that officials are continually monitoring "to make sure that the protection is lasting."

The research was conducted from mid-December through mid-February, and while B.C. recorded an overall decline in cases during that time, there was a greater drop among vaccinated health-care workers and seniors than the general population.

The modelling also shows B.C.'s reproductive number – which is an average of how many additional infections are generated by each new case – remains "close to or above one in most regions" of the province.

Health officials have cautioned that when the reproductive number exceeds one, meaning that each person spreads COVID-19 to more than one other person on average, there is a risk of a rapid growth in cases.

The reproductive number has been declining across much of the province, but Henry noted there remains significant risk in the Fraser Health region. Areas represented by the health authority are among the only parts of B.C. to record more than 2,000 cases per 100,000 population since the start of the pandemic, and transmission there remains high.

"Much of what our future could be is driven by what happens in our populous areas in the Lower Mainland," Henry said.

Dynamic compartmental modelling – which the provincial health officer stressed is "not a prediction" – indicates there could be massive growth in infections in the Fraser Health region by May if current trends continue. 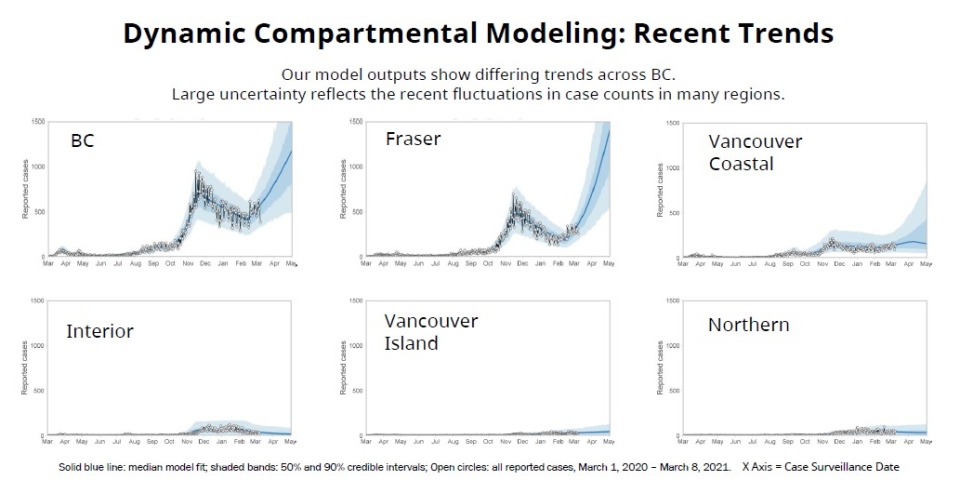 "That is where we need to pay even more attention to making sure that our connections with each other – those needed connections that we have – are done in a safe way," Henry said.

Health officials also announced they were easing restrictions across the province to allow gatherings of up to 10 people, but only outdoors, where research has suggested there is a much lower risk of transmission. Henry said gathering inside – doing things like hosting dinner parties – remains very much off-limits, particularly as COVID-19 variants of concern continue to spread in B.C.

That includes the P.1 variant associated with Brazil, which was confirmed in B.C. this week with 14 cases as of Wednesday. During her presentation, Henry revealed for the first time that those were "all associated with one group cluster" in the Vancouver Coastal Health region.

"We've not seen additional transmission from that group," she added.

Vastly increased screening for variants has seen the province's total surge to more than 600 cases in recent weeks, though health officials noted that the spread remains much lower in B.C. than other parts of Canada. Modelling presented in Ontario Thursday indicated variants make up 40 per cent of new cases in that province.

"We're not seeing rapid takeoff of variant cases like we have seen reported today from Ontario," Henry said. "We're still under 10 per cent, but we are seeing that these are increasing."

Thursday's modelling presentation came on the first anniversary of the World Health Organization's declaration of a COVID-19 pandemic, something Dix noted in a moment of reflection on the past year. Some 901 British Columbians died from COVID-19 before the end of 2020, and that number has since climbed to 1,397.

"It's a day for us to be solemn because of those we have lost, and those who have lost such much in the pandemic," Dix said.

COVID-19 was the eighth leading cause of death in B.C. last year, just behind Alzheimer's disease, even with the massive effort to control the spread of the disease. The modelling data also included the estimated percentage of total years of potential life lost by each cause of death, which bumped COVID-19 down to 11th place. 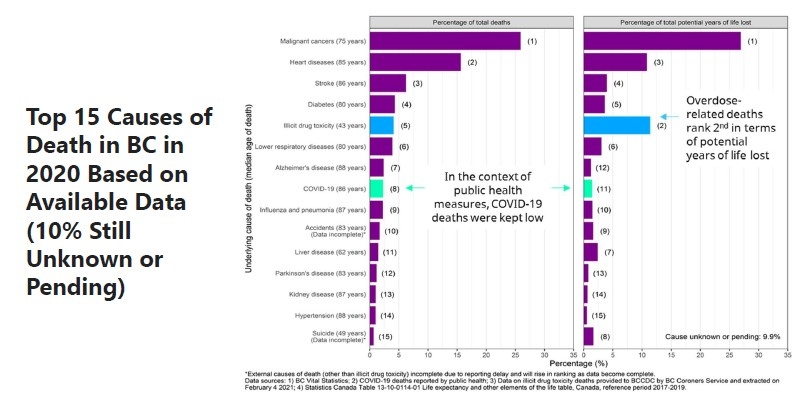 By comparison, illicit drug overdoses – the second ongoing public health crisis in B.C. – was the fifth leading cause of death, and second when ranked for years of potential life lost.

Health officials also shared information on excess mortality for 2020, the number of deaths exceeding what would be expected in a normal year. Across Canada, there was a five per cent increase last year, which translates to about 14,000 additional lives lost.

Henry noted that in the U.S., the excessive mortality for 2020 was about 15 per cent.

"That is the largest increase they've had since the 1918 influenza pandemic. It is the third leading cause of death in the United States in 2020," she added.

"What we see is the measures and the work we did in British Columbia together to try and protect people from this virus meant that we have had a slight increase in people who've died, in our all-cause mortality in this province, but we have not seen a dramatic increase that's been seen in other parts of the country or other countries."