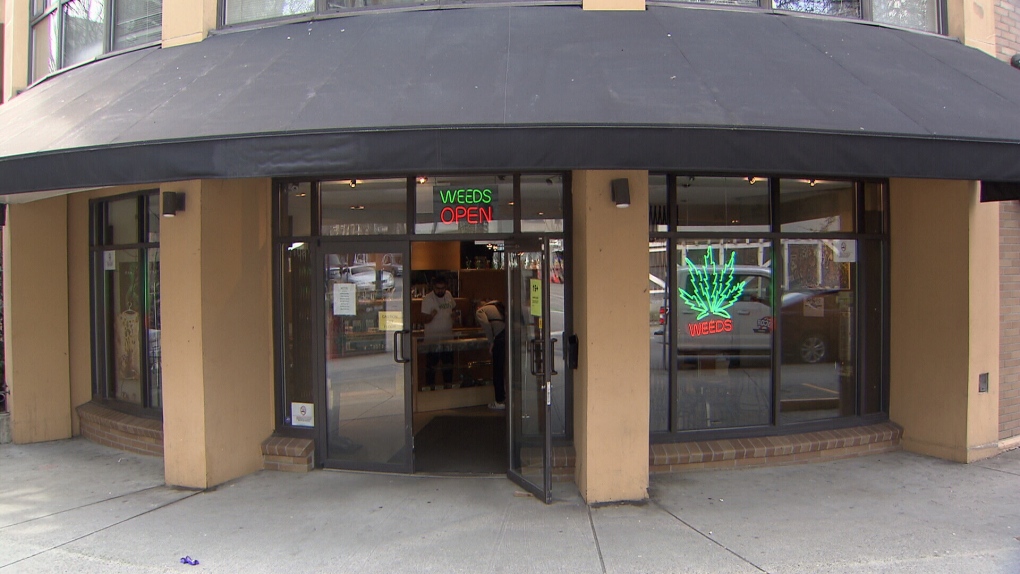 Neighbours say people are loitering and smoking outside Weeds Glass and Gifts on Helmcken and Richards streets in downtown Vancouver.

Condo residents of a Yaletown condo building have had enough with an illegal pot shop operating on the ground floor of their building.

The residents have hundreds of signatures on a petition asking people to “support the closure of Weeds; a store that is illegally dispensing marijuana.”

Weeds Glass and Gifts is located on the ground floor of a building at Helmcken and Richards in Vancouver’s downtown. Though the shop is currently waiting for a business licence, the operator is selling marijuana products such as BC bud and edibles.

Don Briere, the shop owner, told CTV News, he hopes to see his licence soon and that “we employ well over 200 people and once they started putting the pressure on we voluntarily closed a lot of our stores and we had to lay off well over 100 people.”

The City of Vancouver has provided two weeks’ notice for residents to give feedback on this particular location.

A resident of the condo building above the shop told CTV News, “The petition is not about anti-marijuana.” Rather she said, “The store has not worked with the residents to address our concerns.”

She claims a number of residents smell pot coming from inside the store, the level of loitering and smoking outside the store is going up and, “this store has been defying the strata and city bylaws for four years so enforce it.”

While Briere told CTV News, “we’ve stopped all kinds of smoking inside and if we see anyone smoking outside, we go out and remind them that there’s a 12 metre rule.”

The Greater Yaletown Community Association also expressed concerns about the store operating so close to Emery Barnes Park and the Gathering Place, a service centre used by people with addiction and mental health issues.

"The Weeds operation is illegal, and bizarrely enough, is still allowed to operate in proximity to vulnerable populations," the association said in an email. "All we ask is that Weeds and other cannabis stores be located in more appropriate retail-zoned areas a couple of blocks away."

The deadline for public input is March 29.