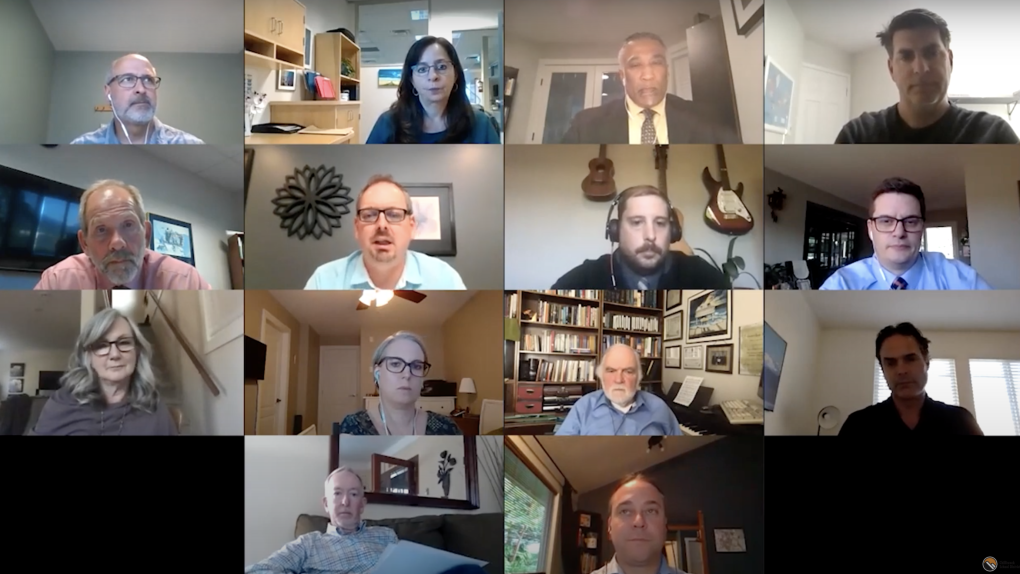 The chair of the Chilliwack school board, Dan Coulter (fourth photo from left on second row), announced the board had voted to censure Barry Neufeld, a trustee (third photo from the left on third row) during the school board's May 26 meeting.

VANCOUVER -- The Chilliwack school board has voted to censure Trustee Barry Neufeld over a Facebook post that included transphobic comments and coronavirus conspiracy theories.

The decision was made during an in-camera board meeting on May 26, and was made public by board chair Dan Coulter, who read a brief statement about the vote during the public portion of the meeting.

As part of the decision to censure Neufeld, the board decided he will not have any school liaison duties, will be removed from committees and committee work, and will also not invite him to any school district events where students or staff will be in attendance.

"He's been making posts similar to this since the previous board, and he always apologizes, removes the post or shuts his Facebook page," Coulter told CTV News Vancouver.

Coulter explained that censuring a board member is a way to show that the member is not abiding by the school district's own code of conduct.

Reached by telephone Friday, Neufeld said he would not be commenting on the board's decision. When CTV News Vancouver attempted to ask questions about the Facebook post, Neufeld hung up.

The Facebook post in question was published on May 9. In the post, Neufeld speculated about the gender identity of Theresa Tam, Canada's chief medical officer, and cast doubt on both the World Health Organization and the seriousness of the threat posed by COVID-19.

The disease has now killed nearly 7,000 Canadians, and more than 350,000 people around the world.

This is not the first time Neufeld has been the centre of a controversy. He has repeatedly made comments questioning the validity of transgender people's experience.

In November, the B.C. Supreme Court dismissed a defamation lawsuit he filed against Glen Hansman, a former head of the BC Teacher’s Federation. In numerous media interviews, Hansman had criticized Neufeld for writing on Facebook that B.C.'s Sexual Orientation and Gender Identity curriculum was "a weapon of propaganda to infuse every subject matter from K-12 with the latest fad: Gender theory. The Sexual Orientation and Gender Identity (SOGI) program instructs children that gender is not biologically determined, but is a social construct."

In that October 2017 post, Neufeld went on to write that: "The BC Ministry of Education had embraced the LGBTQ lobby and is forcing this biologically absurd theory on children in our schools. Children are being taught that heterosexual marriages (are) no longer the norm." 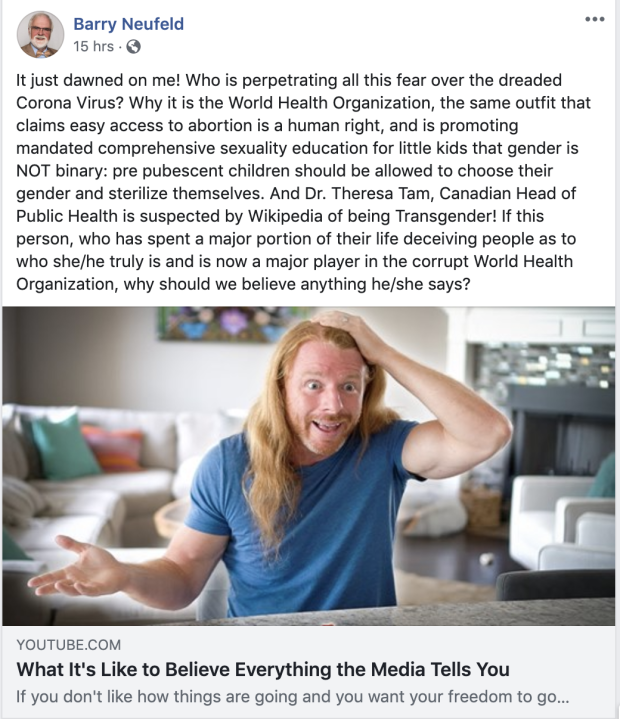 A post that appeared on Barry Neufeld's Facebook page on May 9. Neufeld's fellow board members on the Chilliwack school board voted to censure him over the post on May 26.

"I feel the frustration that it is near impossible to remove a school trustee once they are elected," Coulter said, adding that Neufeld's comments overshadow other work the school board is doing and have strained the working relationship between board members.

In 2012, the Vancouver School Board voted to censure two school board trustees, Ken Denike and Sophia Woo, over comments they made about the school district's anti-homophobia policies, according to the Georgia Straight.