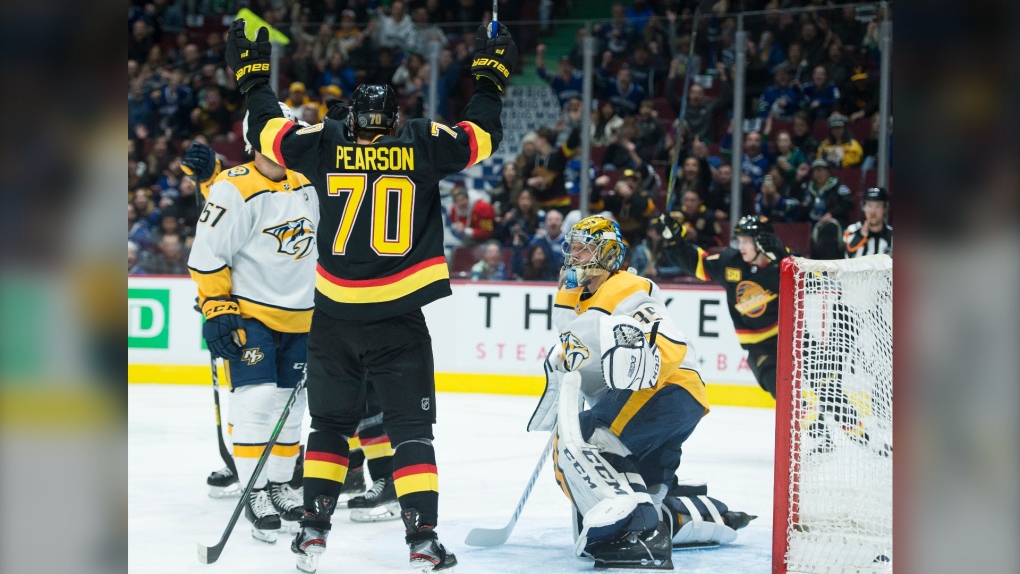 VANCOUVER -- The final score made the win look easy, but Jacob Markstrom was the difference as the Vancouver Canucks snapped their four-game losing streak with a 6-2 win over the Nashville Predators on Monday.

“You've gotta come up with some timely saves,” said Markstrom, who made 36 stops to earn the win as the Canucks began Sedin Week to celebrate franchise greats Henrik and Daniel Sedin. “Today we scored a lot of goals, but when you get called on to come up and help the team you gotta step up, especially at this time of the year.”

Canucks coach Travis Green went back to Markstrom despite a 6-2 loss to the Calgary Flames last Saturday.

“He was great,” said Green. “I've been with Marky awhile. We needed a response and I know - not that he was bad or didn't have a good game against Calgary, but it's not too often that he has a couple in a row.”

Former Canucks captains Stan Smyl, Trevor Linden and Markus Naslund were all on hand Monday for Legends Night, ahead of Wednesday night's jersey retirement ceremony for Daniel and Henrik Sedin. The Sedins were on hand to take in the game, and received a standing ovation when they were introduced to the crowd.

“The building was buzzing,” said Zack MacEwen, who opened the scoring with his second goal of the year. “You could feel the energy. It was great to have lots of energy to start the game and to come out with a win, and it's a really good feeling to score.”

Elias Pettersson and J.T. Miller had a goal and an assist apiece to lead Vancouver. Brandon Sutter, Jordie Benn and Jake Virtanen also scored, while Quinn Hughes had three assists to take over the lead in the rookie scoring race with 44 points.

Craig Smith and Mikael Granlund replied for the Predators.

Pekka Rinne lasted just 20:58, giving up four goals on 17 shots in his first appearance in four games. Juuse Saros stopped 13 of 15 shots through the final 39:02 of action.

The Canucks were 2-for-4 on the power play, while the Predators were 1-for-6.

With Brock Boeser on injured reserve after suffering an upper-body injury in the Canucks loss to the Calgary Flames on Saturday, Green juggled his lines on Monday in hopes of inspiring a group that had gone 0-3-1 in its last four games.

The move paid dividends early as MacEwen opened the scoring at 7:06 of the first period by taking a pass in the slot from Miller and blasting it past Rinne.

Vancouver added two more goals in the next seven minutes. Sutter deflected a Pettersson shot past Rinne during a power play before Benn drifted in a shot from the point for his first goal in a Canucks uniform.

“Those two guys, Markus (Naslund) and Linden, are probably like `This kid's only got one goal,' said Benn, who grew up as a Canucks fans in Victoria, B.C. “They're probably making fun of me, but I mean they scored a lot of goals in their day.

“It's cool, growing up watching the Vancouver Canucks and then finally get my first. It's pretty cool.”

Fifty-eight seconds into the second period, Pettersson picked up his 24th of the year, ending Rinne's night.

The momentum started to shift when Tyler Myers took an extra cross-checking penalty when he and Austin Watson dropped the gloves at 5:01 of the second. The Predators spoiled Markstrom's shutout bid when Smith scored his 13th goal of the year during the ensuing power play. Granlund jumped on a loose puck 66 seconds later to make the score 4-2.

“I thought we really continued to work,” said Watson. “Down 4-0, it'd be pretty easy to go away at that point. We got two goals pretty quick there.

“Markstrom, he had seven to 10 Grade A chances that he came up big on. I thought we forced the envelope there. It wasn't enough to get it done.”

Vancouver restored its three-goal lead with two minutes left in the second, when a Hughes shot from the blue line bounced off Miller's knee and past Saros into the net.

Tempers flared early in the third as Sissons ran over Markstrom in his crease, drawing a goaltender interference penalty. The Canucks rounded out the scoring as Hughes fed Virtanen for another power-play goal, 2:32 into the third.

NOTES: The Canucks wore their black skate retro jerseys against Nashville for the final time this season. Right wing Justin Bailey played his first game as a member of the Canucks after being signed as a free agent last summer.