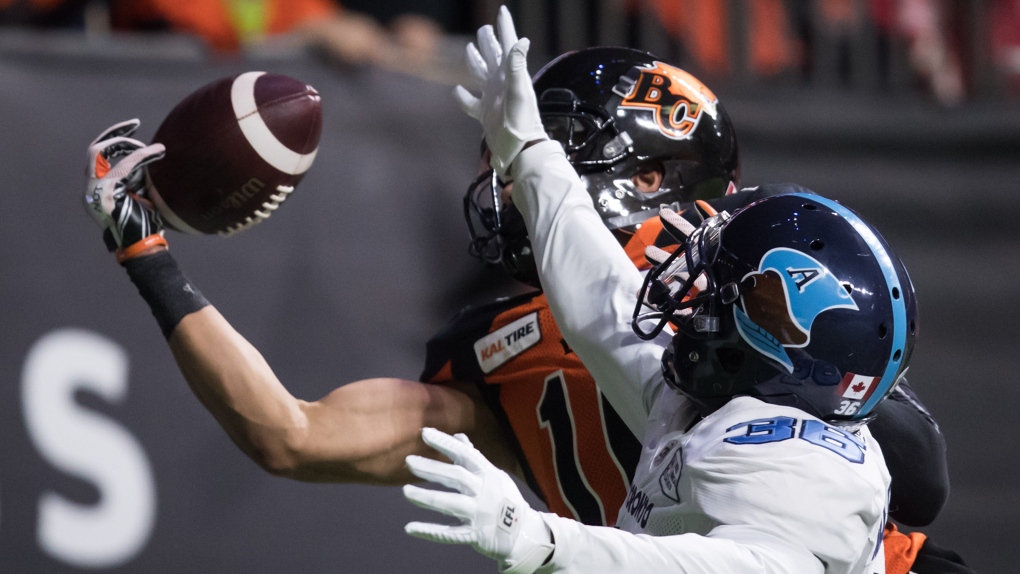 VANCOUVER - It might be late in the CFL season, but the B.C. Lions are finally clicking.

The Leos (5-10) posted their fourth victory in a row on Saturday, trouncing the Toronto Argonauts 55-8.

“We're turning into the team that I think we all expected to be,” said B.C. quarterback Mike Reilly, who had a career-high five touchdown passes in the win.

“We're certainly not perfect and in the game tonight there were certainly things that we could have and should have done better and we'll take a look at that tomorrow. But we've just got to keep taking it one game at a time.”

Reilly completed 21-of-27 attempts and threw for 276 yards on Saturday, a performance that propelled him to the top of the league's leader board. He now leads all quarterbacks with 3,891 passing yards and is tied with Toronto's McLeod Bethel-Thompson for passing TDs (20).

The 29-year-old now leads the CFL in receiving yards with 1,300 on the year and is tied with Hamilton's Brandon Banks for receiving TDs (nine).

Burnham's most sensational play of the night came midway through the first quarter after the Argos fumbled the ball away for the second time and B.C.'s Gary Peters ended up with it at the bottom of a heap.

Reilly completed the ensuing drive, sending a long pass into the end zone where Burnham, under pressure from a pair of Argos defenders, made a one-armed catch and managed to keep a foot on the field to chalk up another major strike.

“Mike gave me the opportunities. Like I've said all season, I go out and I just try to make all the plays I can,” Burnham said, adding that he thinks he could have made some of his catches a little easier.

“But you've got to make them any way you can.”

While the Lions dominated the Argos offensively, B.C.'s defence also limited Toronto to just 167 offensive yards and 16:36 in possession time.

The Lions' defensive core has been riding the momentum of recent wins and carrying good performances from one game to the next in a bid to take pressure off the offence, Peters said.

“That's the onus for us - take everything and put it on our back. Don't take stupid penalties, don't give up big plays and just play fundamental ball,” he said.

“When we're playing really well on defence ... Mike gets more comfortable and you can see what they do when they get comfortable.”

The Argos' only points of the game came with just six seconds left on the clock when Amanti Edwards caught a 27-yard touchdown pass from Bethel-Thompson.

Edwards also caught a three-yard toss for the two-point conversion.

Toronto quarterback James Franklin completed 6-of-9 attempts for 32 yards with an interception. He was replaced by McLeod Bethel-Thompson in the third quarter, who connected on 9-of-14 attempts for 94 yards, including a touchdown.

“They were the much better team tonight. Not just better but much better in all phases,” said Argos coach Corey Chamblin.

Chamblin admitted that his squad hasn't found a way to get wins this season, but insisted they'll continue to work through the end of the year.

“The thing is, you can't let losses give you a losing mentality. You have to continue to fight. I don't care if you lose by one point or by 30 or 40 points - losing's losing, but you've got to find a way to win,” he said.

“For us, right now, it's about looking at where we are right now, finish up with this year and get a jump on the next one.”

The Lions suffered a similar stretch of dismal play through much of the year, dropping seven games in a row between July and September.

But the team still believed it could win, said coach DeVone Claybrooks.

“It just lets you know that we've got a good group, a good group that stays together,” he said. “You usually get dissension amongst the ranks and pulling and tugging. Those guys believed in each other, kept the faith, no one was pointing fingers at any position, things like that. When you have guys who put the we before the me, you can put up 55 and only give up 8.”

Both winning and losing can be contagious and in the midst of a skid, a player is constantly waiting for the next bad thing to happen, Reilly said.

“Because of how the season started, after 10 or 11 weeks of non-stop losing, it would be easy for guys to kind of fold up the tent and give up on things,” he said. “But we don't have that type of group. I'm just proud of them and we need to continue to work on things and believe that good things will happen.”

The Argos will be back in Toronto next week, hosting the Ottawa Redblacks on Friday. The Lions will head to Edmonton to battle the Eskimos on Saturday.

NOTES: Lions quarterback Danny O'Brien scored the first rushing TD of his CFL career in the second quarter. He added another before the end of the game. ... B.C. led 48-0 at the end of the third frame, marking the largest lead the club has ever held heading into a fourth quarter.

This report by The Canadian Press was first published Oct. 5, 2019.