Mike Reilly dominant as BC Lions down Ottawa Redblacks 29-5 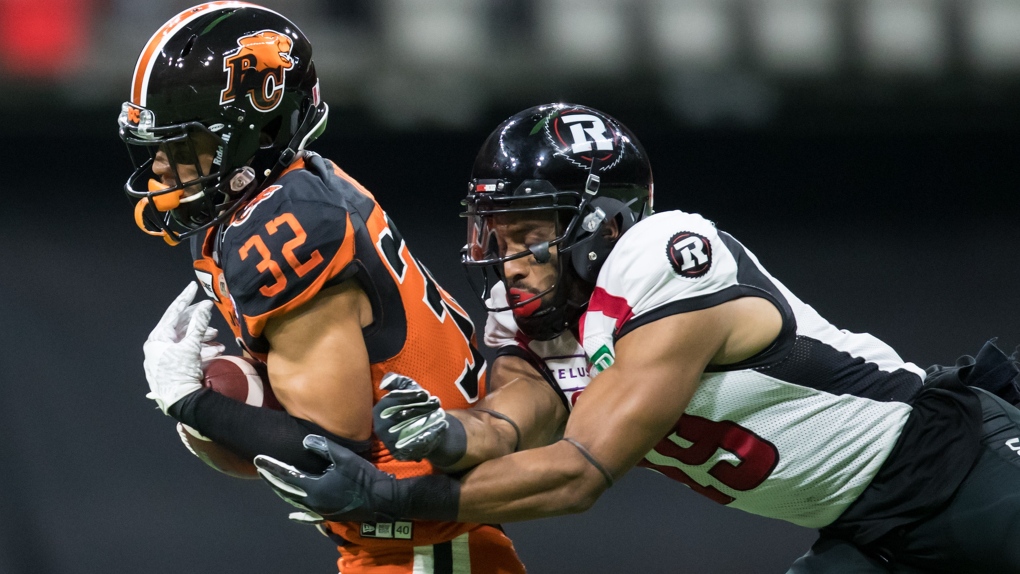 B.C. Lions' Branden Dozier, left, intercepts a pass intended for Ottawa Redblacks' Nate Behar during the first half of a CFL football game in Vancouver, on Friday September 13, 2019. THE CANADIAN PRESS/Darryl Dyck

VANCOUVER - Duron Carter says it was simply time for his BC Lions to get a win on Friday.

“We have the weapons on offence. Everybody knows what we can do individually,” the wide receiver said after BC beat the Ottawa Redblacks 29-5, capturing the Lions' first home victory of the season.

“It's just football's a team sport, the ultimate team sport. And as a team, we showed what we can do today.”

The win snapped a seven-game losing skid for BC (2-10) and Lions coach DeVone Claybrooks said it showed that his group is on the right path.

“You can see every week that we're getting closer and we're getting closer,” he said. “So it's crucial in that aspect to bring it to fruition where all the things that we've been preaching and stuff is validated now. It puts some umph behind it and carries a little weight.”

Quarterback Mike Reilly was dominant from the outset on Friday, connecting with wide receiver Lemar Durant to set up a 43-yard touchdown run just two minutes into the game.

He also connected with Carter on a 28-yard pass, earning the receiver his first TD in a Lions uniform.

By the end of the night, Reilly had passed for 286 yards, two touchdowns and two interceptions. He also rushed for 31 yards, including another two majors, and a big drive in the second quarter.

With just over a minute left in the first half, Reilly struggled to find a passing lane, and instead deked around the Ottawa defence, taking off on a 27-yard dash for a first down.

He followed up with a 20-yard pass to Bryan Burnham along the sidelines to put the Lions within striking distance, then finished the job on his own, muscling his way into the endzone for a three-yard touchdown.

Having a strong offensive line made a huge difference for the Lions on Friday, Reilly said.

The game marked the first time all season that BC has not given up a single sack.

“To be in that pocket and hear them communicating and picking things up, and working with (running back Brandon) Rutley and (wide receiver Jevon) Cottoy I thought they did an awesome job,” he said.

“There were multiple times tonight where it felt like we were able to play the offence that we want to.”

Reilly's performance pushed him into the 15th spot on the CFL's all-time passing list with 30,578 yards over 151 career games.

“To be climbing into that area statistically is cool,” he said.

But the former Grey Cup MVP was quick to note that he isn't focused on individual milestones.

“I've got much bigger plans for my time here in BC and those are way more important,” he said. “If I focus on those and trying to build this program, all those (career milestones) will take care of themselves.”

The Redblacks (3-9) struggled offensively on Friday, scoring on a 32-yard field goal by Louis Ward and a late-game safety.

Quarterback Jonathon Jennings put up 239 passing yards and two interceptions, but he was consistently pestered by a stalwart Lions defence that registered four sacks and five pass knockdowns.

“It was very frustrating. To lose like that, especially two weeks in a row, not competing, that's really tough,” he said. “We're all pros, we all get paid to play this game. We didn't show better.”

Despite Friday's result, there are still a number of issues Claybrooks wants to address before his team plays in Ottawa on Sept. 21.

The coach wasn't happy with how many times his defence was called offside, and he wants to see more discipline from the group as a whole.

He also wants his players to stay engaged and hungry when they have the lead.

“We're trying to develop that killer instinct to finish,”Claybrooks said. “It's just another step in the journey. Are we where we want to be? We're not even close. But, I mean, it's a win. We'll take it and it's something to build off of.”

The Lions know they'll have to find yet another level to clinch a road win against the Redblacks next week, said defensive back Gary Peters.

“When you get back-to-back games, often you win the first one and just get blown out in the second one,” he said. “So for us, we just need to focus mentally and just stay locked in, take this win and let it ride over to the next game.”