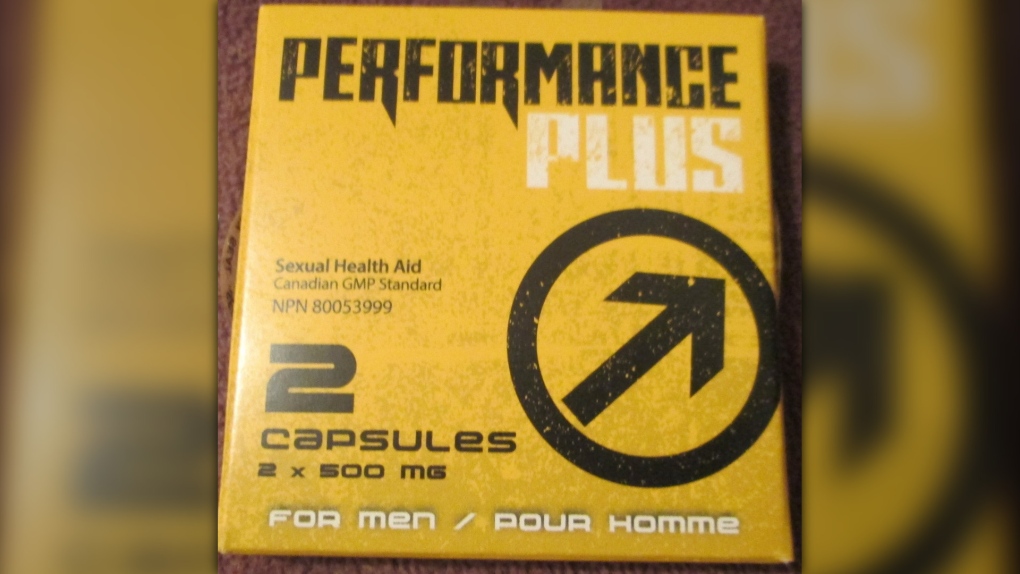 Health Canada has suspended the product licence for Performance Plus sexual enhancement capsules, making it illegal for any business to sell them. (Handout)

VANCOUVER -- A brand of sexual enhancement capsules that are advertised as "all-natural" actually contain an undeclared prescription drug that can potentially pose serious health risks to users.

Health Canada said laboratory testing determined that Performance Plus capsules contain sildenafil, a prescription drug used to treat erectile dysfunction that should "be used only under the supervision of a health care professional."

"It should not be used by individuals taking any kind of nitrate drug (e.g. nitroglycerine) as it can cause potentially life-threatening low blood pressure," Health Canada wrote in an advisory.

"Individuals with heart problems are at increased risk of cardiovascular side effects such as heart attack, stroke, chest pain, high blood pressure and abnormal heartbeat."

An online listing for Performance Plus claims the product "does not contain drugs that can leave you feeling flushed with a headache or with flu like symptoms like many other vitality drugs" and that there are "no known side effects when taken as directed."

This isn't the first time Performance Plus has come under scrutiny from health officials. Last October, the company that distributes the capsules, TW Trade, issued a voluntary recall after it was discovered the expiry dates listed on the packages didn't match those on the blister packs inside.

The capsules were only sent away for testing after Health Canada discovered TW Trade was apparently continuing to sell the products, despite it owns recall, at two adult stores it owns in Ontario.

Health Canada said it has now suspended the product licence for Performance Plus, making it illegal for any businesses to continue selling the capsules. People who have already purchased the product are advised to stop using it and to speak with a doctor if they have any health concerns.

Users are also urged to report any adverse reactions or complaints regarding Performance Plus capsules to Health Canada.