Olivia Yau is the first to admit she's not great on a bike.

"Riding on a road is scary. It's not exactly everybody's thing," Yau says.

About four years ago, she hopped on a small electric scooter, not much bigger than a skateboard, for the first time. She hasn't looked back.

It wasn't long after that she and her business partner, Ambrose Tham, decided to turn their passion for light, portable transportation into a business, founding Urban Machina, a Vancouver-based importer and distributor for all things e-scooter.

"Do you think this is the future of commuting?" I ask Yau as she wheels a $1,350 baby blue Inokin Light, which can travel 22 kilometres at speeds of up to 25 km/h, out of the office park loading bay and into the parking lot.

"Yes," Yau answers. "When I ride I just feel free…I'm not stuck in traffic. It cuts my commute time literally in half."

And both Yau and Tham say their sales tell the story of burgeoning demand in B.C., tripling their numbers year-to-year between 2017 and 2018.

The first two quarters of 2019, they say, have been their best yet.

At the high end are scooters like the Evolv Pro, with two motors, a 90 kilometre range, and a top speed of 65 km/h. It comes with an equally steep price tag of $2,599.

And it turns out some of their best customers are seniors, who don't mind a responsible rip down a divided bike lane.

E-scooters banned across most of B.C.

But taking a spin beyond private property or specially-designated trails in B.C. presents a bit of a problem.

That's because the vehicles aren't specifically defined under the province's Motor Vehicle Act.

Unlike other low-powered vehicles like electric bicycles, which don't require a licence or insurance, e-scooters, motorized skateboards and hoverboards ride in a gray area, seemingly requiring insurance, yet at the same time uninsurable because they don't meet provincial safety standards.

That's prompted the mayors of both Victoria and Kelowna to ask the province for an exemption in order to pilot e-scooters on their streets, writing the lack of definition has "created confusion" and that regulating them like bicycles and e-bikes would be a "sensible approach."

"Instead of saying that it's illegal, it's better to regulate it," she says.

On Monday, the province announced its "Active Transportation Strategy," which includes a review of the Motor Vehicle Act within the next one to two years to include "emerging active transportation modes," like electric bikes, scooters and skateboards.

With hundreds of kilometres of bike routes in Vancouver, you don't have to wander far before spotting someone e-scooting on the seawall or sharing a bike lane.

"They're on our radar here," said Sgt. Jason Robillard, with the Vancouver Police Department.

Technically that means anyone caught riding on streets, bike lanes and sidewalks (anywhere but private property with few exceptions), can earn a $598 ticket for operating a vehicle without insurance, as one skateboarder learned in 2017.

The City of Vancouver has also banned the use of motorized overboards, unicycles, scooters, skateboards and Segways on the seawall and park paths "to reserve the space for active modes such as walking and cycling," says in this December 2017 memo, which the City says is still accurate. 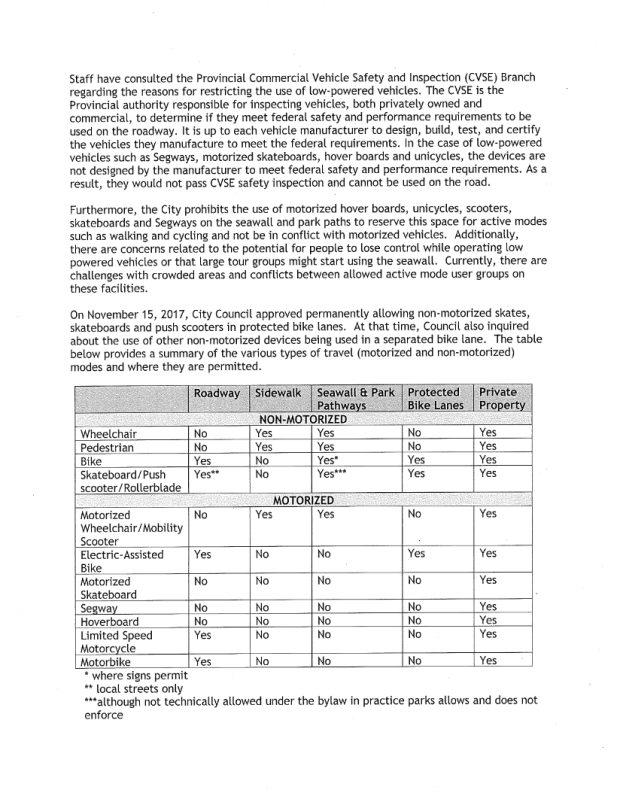 This December 2017 memo from the City of Vancouver details what types of non-motorized and motorized transport can be used. The City says this breakdown is still accurate.

In practice, Robillard says, the tickets aren't written very often, and are up to the officer's discretion.

And while the VPD won't condone breaking the law, it does encourage those riding to "be responsible and respectful to everybody."

Meanwhile, the City of Vancouver says it will continue to focus on bike share and electric bikes until changes are made to provincial regulations.

Scott Edwards, Vancouver's Manager of Street Use and Public Bike Share, says he's chiefly concerned about safety and impacting cyclists and others who use existing space.

A recent Consumer Reports survey found some 1,500 people were injured from e-scooter related accidents across the U.S. since late 2017, including broken bones and brain injuries. At least eight people have died.

"Be cautious of potholes, cracks, and bumps," Edwards said.

Some have outright banned them while they figure out how to control the "clutter" from dockless systems that have caused frustration as the vehicles pile up, and in some cases, that anger's spilled over into vandalism and destruction.

And as Yau steps on board her scooter, and pushes off, she's keeping her eyes firmly on that future.

"A lot of people when they see me ride, they ask me where did I get it? Can I try it?" she says.

And while she's not quite as confident about the rules catching up as in her e-scooting ability, Yau insists Urban Machina is leading the local pack.

"Regardless of what the regulation is, the demand is there," she says.